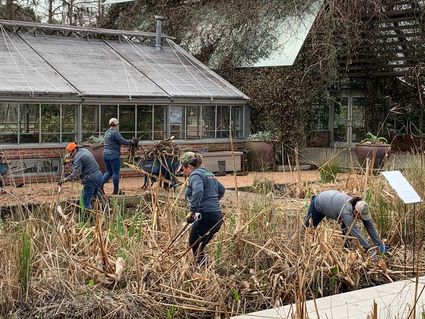 The Big Freeze that swept across most of Texas on Valentine's Day weekend took a toll on Orange County gardens big and small.

Shangri-La Botanical Gardens, Orange's world-class stress-reliever presented free to citizens and tourists alike by the Stark Foundation, was no exception.

"We have a year-round winter routine," said Jennifer Buckner, Director of Horticulture. "This winter has just required more work than normal."

The park, which is open to the public from 9 a.m. to 5 p.m. Tuesday through Saturday, was hit hardest recently by Hurricanes Laura and Delta last August and September.

"We lost a lot of trees in Laura, so some of our landscapes have changed," Buckner said. "We were gearing up to do some replanting projects that the hurricanes created, and the ice storm caused the big projects to get delayed.

"We like to get new plants in during late winter and early spring, especially for the larger things, while they are still dormant. That way we can get them established."

When the ice storm hit, Buckner and her staff (eight at the garden, six at Stark properties downtown and a greenhouse on 16th Street) were as prepared as could be.

"We kind of knew ahead of time that we were going to have a freeze, so we started preparations. We put down extra mulch and our frost cloth. We turned off the water and drained the lines," Buckner said. "We still had water breaks we've been getting fixed."

And they lost some flowers and plants.

"Most of the shrubs and trees weren't harmed, but we had a lot of perennials to clean up. We attacked the mush first, leaves on plants that had already turned to mush. If you don't remove those, you might have issues with fungus.

"Our bamboo took a hit. Our azaleas got hit pretty hard. The older buds got zapped by the freeze. The younger buds survived. Now you can see green leaves replacing the brown ones.

"Soon you won't be able to tell we had 13 degrees and snow."

On a guided tour of the now one-way path around the gardens – part of Shangri-La's coronavirus health protocols – plants were blooming and beginning to flash color last week  – especially the pink and red azaleas and the purple Japanese magnolias.

A couple of hundred yards from the entrance, the multi-tiered display of potted plants was doing its best to offer a botanical version of a stiff upper lip.

"This is where we have our highest concentration of subtropical plants and it took a hit," said Buckner, a 13-year Stark Foundation employee with a bachelors in horticulture and masters degree in floriculture, both from Texas A&M.

"But it won't be long and it'll look good again," she vowed.

The best news is that the property only lost electricity for eight hours during the February storm and propane heaters were available to keep things warm in the greenhouses. 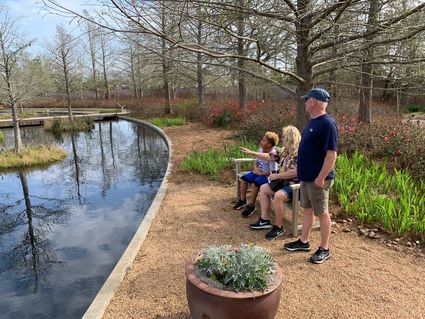 Kathy Schnepel points out a turtle in the pond to Amari Schnepel as Darrin Schnepel looks on as the visitors from Forney, Texas, tour Shangri-La Botanical Gardens Friday, March 12.

"Our orchids, bromeliads and other tropical plants came out fine," Buckner said.

Shangri-La has adopted an entrance policy it calls "time ticketing" for staggering park entry times. Visitors planning ahead are asked to reserve spots by going online to shangrilagardens.org/visit.

Buckner noted that visitors are being allowed in if they forget to make a reservation.

But everyone must bring a mask and wear it at the entry gate and when inside buildings.

"All admissions are free but we still have health protocols. There are limits in the common areas to accommodate social distancing, and some tighter paths are closed, because it's hard to social distance on those," Buckner explained.

"We have a phased opening scheduled to hopefully get back to normal. Everything has its season. We'll pick up and clean up and keep going."