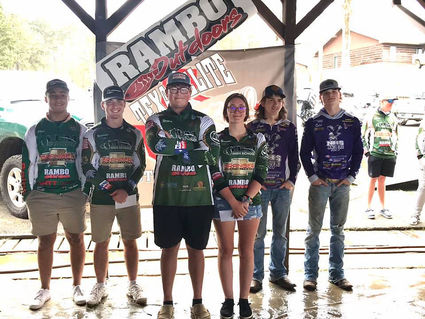 The LCM bass club has dominated the southeast Texas high school circuits this year and they were at it again last weekend. As if to say, "We just

like Rayburn a little more," the club took four of the top ten spots fishing Toledo Bend. They have consistently posted impressive numbers on Rayburn and fish the majority of their tournaments on the older of the two impoundments. Last weekend they took their winning ways to T-Bend and Layne Pevey teamed up with Logan Freeman to best the eighteen team field with a 20.63-pound stringer. Their winning catch was anchored with a solid 7.33-pound largemouth. Ethan Tant and Jermaine Woodson captured third place honors with their 18.33-pound catch barely nipping fourth place winners, Brendon Brones and Dakota Posey, by a razor thin .20-ounces. Garrison Byerly and Will Henson brought a 12.70-catch to the scales to nail down the ninth spot.

If you are a professional bass fishing junkie you need to start making different arrangements today.

The Sabine River event originally slated for April 8-11 and moved to August due to the pandemic is back on for the original date. That doesn't give you long to change plans or re-schedule vacation days. Governor Abbott's recent decision to rescind mandates in Texas was a game changer for both the County and Bassmaster Elite folks. The past three Elite events held out of the Orange Public Boat ramp drew nearly 100,000 fans and neither entity wanted to see those numbers diminish due to safety restrictions in place at the time. Bass C.E.O., Bruce Akins, as well as County organizers are still encouraging spectators to practice social distancing and hand washing to reduce the risk of germ spreading. The past three tournaments have been as good as advertised and this one should be even more competitive with the earlier times slot. Two more reports of double digit bass this week, both on Toledo Bend and both on the south end of the lake, indicate the spawn may still have a little life remaining. The shot at a double digit fish is the calling card for fishing the spawn and that opportunity is much narrower as those big sows get it done early. `One of the two big fish, an 11.33-pound bass was caught at night free-floating a lizard in Buck Creek. The other, a 10.01-pound fish ate a Carolina rigged watermelon brush hog in Toro Bay. Night fishing can be a very good option during the spawn as there is less traffic and the larger fish are not as quick to move off their beds due to fishing pressure. I cannot tell you how many times we saw big fish on their beds when I was guiding the Bend full time and could never draw the first strike. Under the cover of darkness it was not unusual to get your offering slammed on the first cast by that same fish! Ironically enough, I found no better lure for locating these coveted bass at night than a black single spin spinnerbait, but the lure that

invariably sealed the deal was a free-floated lizard or ten-inch worm. 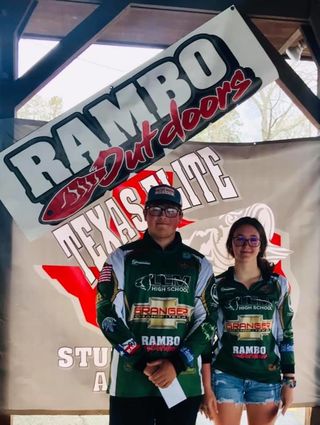 Thanks to a rigging tip shared by Bob Zavada, both our number of strikes and successful hook sets increased dramatically. In spite of a howling wind that seems to be a daily nuisance, the trout catching in Sabine Lake continues to be a little better than average. Just about the time I thought we had really figured something out, I sat and watched two bank fishermen walking the rocks on the north end of the revetment wall limit in less than thirty minutes! Considering the fact that they had to climb back up the rocks to deposit each fish in their trucks, that is a lot of fish catching in a hurry. One of the anglers was fishing a Vudu shrimp under a popping cork and the other was getting it done with a small Swim Bait. Every fish they caught appeared to be a 16 to 20-inch trout. Even more interesting than the fact that they were just hammering the fish, was the fact that the wind in their face was soaking them with spray off the white caps. I did not share their tenacity and settled for three flounder caught on the drier side of the wall. Thanks to the wind there has been less traffic on the lake all week and that equates to less reports as well. The bite is still good when you can get out and best of all, we are still not seeing any dead fish.