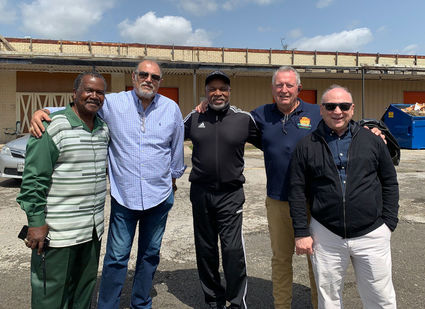 "Ministry is my heart," said the leader of the One Way Outreach Ministry.

So is rebuilding the city he grew up in, so Tuesday he and leaders of two Florida-based companies and ministers from Houston and Florida were touring the vacant East Town Shopping Center at the corner of Turett and Simmons, near the Port of Orange.

Thomas' vision is to revive the old neighborhood by turning a food desert into a thriving community.

Hubb Agra will be building a hydroponic farm on the slab that used to be home to Weingarten's Grocery, TG&Y dime store and S&H Green Stamps and Weiner's Department Store.

Redland Ahead, a non-profit that is veteran-founded and operated, will hire and teach the new farmers under a government grant.

"This is to replace old farmers, like me, whose average age is 69," said John Mills, a former mayor of Miami Lakes, Florida who is Redland Ahead's president.

"We can keep farming alive with hydroponics. What it used to take 8 of 9 acres to produce, can now be produced in just 1 acre using hydroponics."

Hydroponics is farming that does not require soil. It can be done indoors. Jose Matto, CEO of Hubb Agra, is pushing the concept of organic hydroponic greenhouses that was developed in Spain.

The old shopping center is owned by Friends Helping Friends.

"We've teamed up with a great bunch of guys and we're taking this all over the United States," said Paul Miller of Houston, chairman of Friends Helping Friends, an Apostolic ministry of 257 churches, he said.

Plans for the area include opening a farmers market and housing for veterans, Thomas said. He'd like to offer a meeting place for drug rehabilitation, too.

"I want to be able to offer jobs when we get the greenhouse up and running," he said. "I want to organize a campaign to clean our communities up."

Spears has been a popular mayor since he won the office in an election against Thomas in 2018. He, too, has been leading a campaign to clean Orange up and in Tuesday's meeting, he praised city employees working on a new "litter force" to clean up litter and debris.

The mayor said he was unaware of Thomas' new venture but liked the sound of it.

"I don't know what he's doing, but I know that property was for sale," Spears said.

"Anything that is positive and healthy and uplifting for our community, we fully support it. But I haven't been made aware of anything yet at this time."

Running for mayor in 2018 was the first of four consecutive runs for a seat on Orange's city council.

April 19 is the first day of early voting for the May 1 local elections for school districts and city governments.

Thomas, who spent much of his adult life in Chicago, said he's "been pastoring" for 30 years, and asks people to contact him by email at [email protected]

Matto was excited about the possibilities in Orange. He said groundbreaking for the greenhouse could come by the beginning of June.

"This is a great opportunity. We're not just looking at this as a project, but what type of impact this will have in the community," he said.

"This is happening. Bishop is making it happen. We're committed."