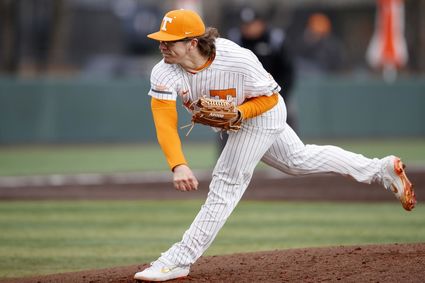 It was a couple of days after Christmas in 2018 when my grandson Logan Smith and his family were visiting Orange for the holidays.

Logan was home in Lufkin from West Point on the Christmas break, but was a pitcher for the Army baseball team and had various daily pitching routines he had to do to prepare for the upcoming season and wanted me to work out with him.

I told him my days of seeing 90 mile an hour fast balls were long gone. So, his mother Karen remembered that her college sorority sister Nancy Dallas had two boys-Jack and Chad-that were college pitchers and may want to work out with Logan.

Jack was at Lamar in Beaumont while Chad was pitching for Panola College in Carthage where his father Tony also played.

We met Chad at the West Orange-Stark baseball field and the two went through their assigned preliminary routines before throwing to each other while I safely watched. After about an hour, the two young hurlers went their separate ways and never saw each other again.

Logan kept up with Chad's career from West Point at Panola and then the University of Tennessee the last two years.

Logan was one of the nation's strikeouts-to-walks leaders in 2020 until the season was curtailed in late March due to the pandemic. He called Major League Baseball and asked to have his name removed from the upcoming draft and became a Second Lieutenant and got assigned to Fort Benning in Georgia.

We talked on the phone Sunday and he advised me to mention the great start of the season Chad was having at Tennessee. "He's their Friday starter which means he is the ace of the Vols' pitching staff," Logan said. And he should know because he was the Friday starter at Army last spring.

Chad pitched Friday night against LSU in a Southeastern Conference game, hurling seven innings and allowing only one run, five hits and a walk, while striking out 11 in No. 9 Tennessee's 3-1 victory over No. 14 LSU.

The Vols went on to sweep LSU in the three-game weekend series, improving to 21-4 for the season and 5-1 in the SEC. The last time Tennessee beat LSU was in 2014.

The win upped Chad's record to 4-0 after posting a similar victory over No. 7 Georgia in the SEC opener the week before. He also recorded mound victories over Georgia Southern and UNC Greensboro and is in the nation's top 10 in strikeouts-to-walks ratio. He has pitched 37 innings, given up 31 hits and logged 54 strikeouts.

Besides not ever suffering a loss during his 2½-year college baseball career, Chad was on the SEC First-Year Academic Honor Roll.

While at West Orange-Stark High School, Chad earned Texas Sports Writers Association All-State second team honors in 2017, was a three-time All-District selection for the Mustangs and was named Orange County's Most Valuable Player as a senior in 2018, allowing just four earned runs for the entire season while also batting .410 at the plate.

Chad also was an all-district high school football player, helping lead the Mustangs to consecutive Class 4A state championship games, including a state title in 2016.

Dallas in hoping Good Friday is a good Friday for Tennessee as he is scheduled to pitch against the Alabama Crimson Tide to open the weekend series.

After playing the Florida Gators the next weekend, Chad will start the series against Vanderbilt, the nation's No. 1 team on April 16.

Orange area college baseball fans will have an opportunity to watch Chad Dallas in action April 23 when the Vols travel to College Station to meet the feisty Texas A&M Aggies for a weekend series.

I still like undefeated Gonzaga to win the NCAA Men's Basketball Tournament, provided they got by last night's Elite Eight match-up against USC.

The 2021 Major League baseball season opens for out Houston Astros tomorrow with Zack Greinke set to pitch against the A's at Oakland. He should be followed on the mound by Cristian Javier, Lance McCullers, Jr. and then Jose Urquidy. Manager Dusty Baker hasn't decided who the No. 5 starter will be. The Astros home opener will be April 8 against Oakland at Minute Maid Park.

The No. 6 Texas Lady Longhorns upset No. 2-ranked Maryland 64-61 to advance in the NCAA Women's College Tournament.

Last week I referred to Texas Longhorns head basketball coach Shaka Smart as Shaka Dumb, but he wisely resigned to take over the program at Marquette, where basketball is the school's No. 1 sport. Perhaps Smart can get back to the winning ways he had before his six-year stay at Austin.

JUST BETWEEN US...Although I've never really cared for Sergio Garcia as a PGA golfer because he seemed so cocky, he said he's an "Adopted Son of Texas" where he claims there are only two seasons in Texas-football season and spring football season. He's grown fond of football because his wife Angela is the daughter of former Texas Longhorns quarterback Marty Akins, who played under the legendary Darrell K. Royal. Angela's cousin is married to recently retired New Orleans Saints quarterback Drew Brees. Sergio was in playing at the Austin Country Club in the PGA WCS Match Play event against Lee Westwood Saturday and the two golfers finished the 18-hole match tied. So, in Sudden Death, Sergio made a hole-in-one to advance in what was called "a walk-off ace." He was eliminated in the next round, but leads the PGA golfers by playing in his 51st match.