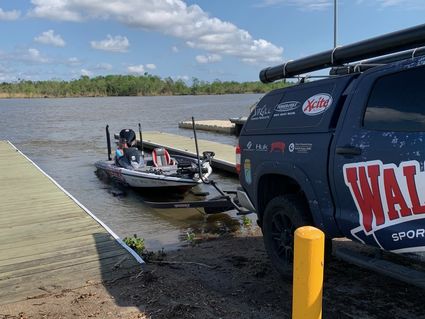 Tyler Rivet of Houma, Louisiana, an entrant in this weekend's Bassmasters Elite fishing tournament on the Sabine River, drives his bass boat to his trailer at the Orange Boat Ramp Monday after a day of "pre-fishing" or scouting for places to catch the big bass. The tournament runs from Thursday through Sunday and admission to watch the afternoon weigh-ins is free.

The Dovetail Games Bassmaster Elite at Sabine River fishing tournament is something Eric Perez has been looking forward to.

"This is the first time we've had an event where things are really open like they used to be," the longtime B.A.S.S. event director said Tuesday, speaking of Texas dropping its mask mandate and crowd-size limitations a few weeks back.

"Of course, bass fishing, by nature, has distancing in it already. We paused like most of the world did last March, but we were able to start back up in July," minus only the big weigh-in gatherings.

Orange's fishing fans broke B.A.S.S. attendance records in 2013 when the first Bassmasters Elite event was held here; more than 30,000 spectators came out for the event that will again include a family-centered Orange County River Festival with live entertainers and children's carnival.

There is no entry fee to join the folks taking advantage of the new Riverside Pavilion as center of the action. Vendors will have food, equipment, clothing and artwork for sale as the Greater Orange Chamber of Commerce manages the non-fishing aspects of the four-day event, helped by hundreds of volunteers.

BASS Angler of the Year Patrick Walters, who is currently 2021 points leader, will be fishing this weekend, along with No. 2 Seth Feider, No. 3 Brandon Palaniuk, a big Orange favorite, and YouTube star Scott Martin.

Beginning Thursday morning, boats will take off from the City of Orange Boat Ramp at 6:45 a.m. and are legally allowed to run as far north as the Toledo Bend dam and as far southwest as Galveston County.

Then, after filling their livewells with the biggest bass they can catch, they must make it back to the boat ramp every afternoon for a 3 p.m. weigh-in.

Greg Hackney knows about that. The champion of the last Bassmasters Elite event held on the Sabine in June of 2018, he is fourth in the series point standings with three tourneys in the books for 2021. 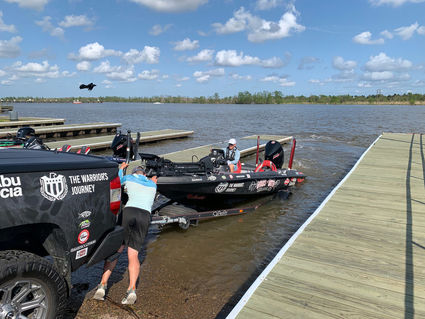 Tyler Rivet of Houma, Louisiana, foreground, helps Hank Cherry of Lincolnton, N.C. guide his bass boat onto a trailer at the Orange Boat Ramp Monday. The two pro fishermen are entered in the Bassmasters Elite bass fishing tournament going on Thursday through Sunday at the boat ramp.

"The funny thing about the Sabine is you can't gather information like you can other lakes," he said. "It's a great fishery, but it's not a fishery where you can get a lot of information off the internet.

Hackney, interviewed by Bassmaster.com, said he expects seasonal patterns may be running later than normal.

"Spring is later this year because that area was impacted by the Big Freeze in February; it's about three weeks behind.

"Typically, the fish should be done spawning by the end of February, but everything just seems to be way behind this year.

Bassfishing tournaments, it turns out, are very competitive businesses. Some well-known fishermen left Bassmaster to fish with a rival organization, Big League Fishing.

Some have already returned to Bassmaster.

"Other circuits may have some household names, but they may not be the top performers," Perez said. "Bassmaster Elite is the top of the top.

"We're not an invitational. You have to qualify to fish with us. It's a little more cut-throat."