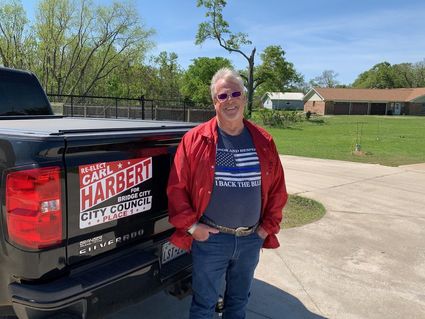 Carl Harbert started his Good Friday with one of the many good deeds he has provided his hometown since he retired as a plant manager.

He helped his 93-year-old next-door neighbor put in a garden.

"I guess it's the way I was raised," he said. "As you get older, you take care of the older people," he said, "and I've been cutting his grass for a while now.

"I just believe in helping people."

Since 2018, Harbert has been Bridge City's Place 1 City Council Member. He is seeking his third two-year term in the May 1 city and school board election. Early voting begins April 19.

Harbert first visited a City Council meeting when a neighbor moved goats and chickens onto a lot next door. He succeeded in getting a city ordinance modified so that city property owners can no longer keep farm animals within 100 feet of their neighbors.

Harbert became a regular at council meetings and eventually ran for office.

"I'd love to see more people show up at council meetings," he said. "People need to be more involved in their government."

As a council member, Harbert is the embodiment of involved.

"I worked with the water department when they were putting in filters. That was my background as a plant operator and plant manager," he said. "It wasn't that I didn't trust the guys.

"I do a ride-around once a week looking for potholes, whatever. I've helped a lot of people with their drainage."

A member of the First Baptist Church of Bridge City, the councilman has been married for 35 years to wife Theresa. They have two grown children, Veronica and Leonel. 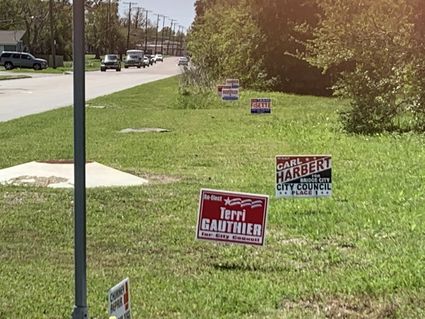 "My fault is I give it all I can," he said of his city work, which pays $200 per month. "And being retired, I can. I don't belong to a bunch of organizations, because I believe in devoting my time to one thing."

Harbert's opponent in his bid to keep his council seat is Aaron Roccaforte, son of Kirk Roccaforte, the longtime Bridge City Mayor and City Council member.

Ironically, Harbert's first try for the City Council came in 2016, when he challenged and was defeated by Kirk Roccaforte, who is now representing Bridge City as an Orange County Commissioner.

"I knew I couldn't beat him," Harbert said, "but I wanted to get my name out there."

For Harbert, that's another mission accomplished.