Orange County and the Civil War 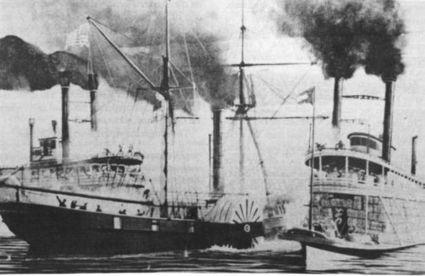 Cotton clad steamers, the Uncle Ben and the Josiah Bell, outfitted with guns at Levingston Shipbuilding, forced the surrender of Union ships the Velocity and Morning Light.

Though there were no major battles fought in Orange County, it secured a place for itself in history during the Civil War. Besides mustering several military units, it also became an important pathway for the transportation of troops and supplies by water, rail and wagon.

Orange County voted with the rest of Texas on Feb. 23, 1861 for secession from the United States of America. Orange votes totaled 142 for and three against.

April 12, 1861 is noted as the start of the War Between the States with the fall of Fort Sumter. Tuesday marked the Sesquicentennial of the Civil War.

Three companies formed in Orange, with the Orange Light Guard mounted riflemen being the first. Fifty-six men enlisted that day, April 27, 1861. In the fall, some of the rebels traveled to San Antonio and joined with another company to form Company B 4th Calvary and participated in battles at Valverdi and Glorieta Pass in New Mexico and fought in the retaking of Galveston. They spent the rest of war in Louisiana.

The Orange Greys were formed on April 29 with 65 enlisted under Capt. S.A. Fairchild. They joined the 13th Texas Cavalry under the command of John H. Burnett.

Joining the 21st Texas Cavalry was the third company formed in Orange. They fought in Arkansas and Missouri and participated in the Red River Campaign in 1864.

Several cousins with the same last name also fought in the 13th Cavalry or with 11th Spaight's Battalion 'Swamp Angels' which spent the early part of the war guarding Sabine Pass, Orange, Niblett's Bluff and Galveston. They were also involved in engagements at Sabine Pass, Calcasieu Pass, Berwick Bay and Stirling Plantation. One cousin, James, was discharged Nov. 25, 1861 at the age of 16. His father, John Sr., also lied about his age to enlist. Records show an enlistment age of 35, but he was actually 41 at the time.

All are buried in various Orange County cemeteries.

Troops passed through Orange on their trek to the east. They embarked on the steamer Florida in Beaumont and traveled down the Neches River, across Sabine Lake and up the Sabine River, passing Orange on its way to Niblett's Bluff and Camp Pleasant.

The Orange County Coast Guard was made up of 24 men. It's duty was to transmit intelligence on the location of blockading forces to advise vessels attempting to run the blockade in the Sabine-Neches area.

Orange became an important part of a major artery of supplies to Louisiana and Sabine Pass. When the water ways were blocked the train between Houston and Orange transported supplies. It could not keep up with the capacity, so wagon trains were used along the old cattle trail to Baillew's Ferry across from Niblett's Bluff.

In 1862 Yellow Fever struck and killed more Orange County Soldiers than died in battle. With the reduction of forces from the fever, Sabine Pass fell to the Federal Navy, who destroyed the fort and barracks.

To strengthen Orange's position, guns were placed at a 20 foot high shell bank a few miles south of Orange. All signals and bars were removed from the Neches and Sabine rivers and they were blocked with a guard boat placed at the mouth of each river. 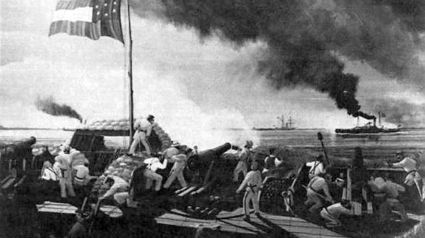 The Battle of Sabine Pass is the most notable skirmish in Southeast Texas lead by Dick Dowling.

Extra supplies of food, ammunition, arms and corn for the horses were stored in Orange and Beaumont. The extra planning and supplies may have kept Union forces from trying to take the area.

Cotton clad steamers, the Uncle Ben and the Josiah Bell, outfitted with guns at Levingston Shipbuilding, forced the surrender of Union ships the Velocity and Morning Light.

In September 1863 after additional fortification, Dick Dowling won the Battle of Sabine Pass.

Dowling may have had the notable battle in the area, but Orange played key roles in the defense of the Southeast Gulf Coast and the Texas borders in the War Between the States.

According to a list by Allen Connel, Evergreen Cemetery in Orange is the final resting place of 84 members of the Confederate Army, ten of whom are unknown, and two members of the Union forces.