Fresh faces at BC Chamber of Commerce- 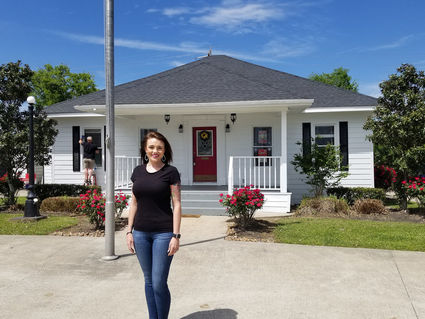 Kelli Lewis, director of the Bridge City Chamber of Commerce shows off the face lift to the BCCC/BC Museum building. Joe Broussard of Alamo Glass installs new windows in the background left.

Kelli Lewis came aboard as the new director of the Bridge City Chamber of Commerce in October.

"It's been good. I absolutely love my members and my board." Said Lewis. "I'm not actually from Bridge City, my husband is. I'm a private school Kelly girl. I worked for the Nederland Chamber eight years ago, so I'm familiar with nonprofits. I ran Commitment to Caring which is a psychiatric boarding home prior to Covid, which is unfortunately the only reason I'm not there. This opportunity presented itself after eight months of not working...I'm very blessed it came across my doorstep. I absolutely love it."

Flooring still needs to be replaced in an area at the back of the building that was damaged due to condensation. Surplus flooring is in storage that will be used, so it will match the rest of the floor.

Plans are to remove the two smaller storage buildings and replace them with one large building.

Lewis said they were trying to bring the building back to as close as possible to the original look.

She is excited for things to start opening back up. They will resume their morning coffees June 8 at the Bridge City Community Center sponsored by the Chamber. "We're super excited about it. I've already sent notice out to our members," said Lewis. "We're finally getting where we can gear back up and get events going again."

The Purse Bingo will be their first live event since the quarantine started opening.

It will be held May 13 at 5:30 p.m. at the Bridge City Community Center. The popular event is near sold out, with only about 20 tickets still available. Tickets are $60 and include dinner at a taco bar catered by the Stuffed Mushroom, two drink tickets and one bingo card for a chance at the ten purses and a dauber. Extra cards can be purchased for individual games. Additional cards for the Louis Vuitton and the Gucci bags are $20 dollars each. Cards for the other purses are $10 each. "We have some amazing door prizes."

Additional drinks can be purchased at the cash bar.

"This is to keep our chamber doors open. This is the first event we've been able to have [since the quarantine]," said Lewis.

They felt blessed to raise more than $2,000 in the Christmas Tree silent auction that was held in December. The amount was enough to fund four $500 scholarships for Orangefield and Bridge City seniors.

Lewis looks forward to announcing other events as the community starts recovering from the pandemic and a year quarantine.

The Bridge City Heritage Museum housed at the chamber office is open to the public during office hours and is free of charge.

They will be launching a new website for the chamber once updated pictures of the building are taken.