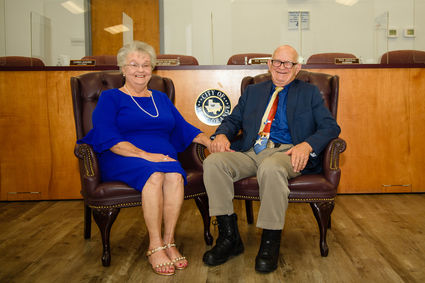 Roy McDonald was elected Mayor of West Orange 10 years before the Houston Astros played in their first World Series.

Or, to put it in Orange County terms, since being elected mayor in 1995, McDonald's leadership has seen the town of 3,500 residents through Hurricanes Rita, Humberto, Ike, Harvey, Laura and Delta and Tropical Storm Imelda, the ice storms of 1997 and 2021 and Sabine River flooding of 2015 and 2016.

He has served as Chairman of the Orange County Housing Authority, the President of the Southeast Texas Regional Planning Commission for a term-and-a-half, President of the Texas Association of Regional Councils, Chairman of the Texas Municipal League's Small City Advisory Committee and was twice appointed by Gov. Rick Perry to the Southeast Texas Regional Review Committee.

Additionally, McDonald has been an ordained deacon and Sunday School teacher at first, Calvary Baptist Church, then, for the last 38 years at McDonald Memorial Baptist Church (no relation).

Add to those titles The Record Newspapers' Person of the Year.

He was honored with the latest honor at the noon Lunch Bunch gathering Wednesday, April 14, at Robert's Steakhouse and Meat Market.

McDonald, 76, is retiring from public office in May, having chosen not to run for reelection after having first joined the West Orange City Council in 1987.

He was also honored with a retirement reception at City Hall Monday.

"We had so many different councils while I was mayor, but we always worked together well," he said. "I had an excellent staff throughout the time I was there."

Born in Glenmora, Louisiana, and raised and schooled in DeQuincy, Louisiana, McDonald came to Texas in 1966, following three years in the army where he worked with missile guidance systems.

A perfect resume for the problem-solving in his future.

At Orange's Dupont plant for 32 years, he worked as a millwright, pipefitter, refrigeration technician, a scaffold rigger. "A general mechanic," he said.

McDonald met his wife, LaVerne, at the Knaptown Baptist Church in the days between ending his three-year Army enlistment and coming to work for Dupont.

"I went to school with her sister in DeQuincy and both my parents and her parents lived there," the mayor said. "We met at church. I asked her to go get a Coke.

"It's history from there."

The couple has two grown children, Troy and Beverley, and five grandchildren. A portrait of the grandchildren is prominently displayed in his office, behind the mayor's desk.

McDonald said one of the best things he's done since being elected in 1995 is starting a once-a-month "mayors breakfast" where city leaders can talk about issues and their solution. It has grown to include city managers, school districts, the county, Lamar State College Orange, the Sabine River Authority and others.

When it comes to legislation, McDonald said of the earliest highlights of his time as mayor came when he pushed and got state legislation to get a quarter-cent sales tax approved for street repairs.

Another thing of which he is proud is his staff's ability to go after government grants that do not have to be repaid.

"The thing I'm most proud of is I've worked real hard with our staff to find, apply for and secure every grant we can to improve things we need," McDonald said.

Budgeting funds from grants and property taxes has steadily built up city properties and services.

"We planned for and built a new city hall without raising taxes any. We rebuilt the fire station and police station. We added restrooms at our parks, bought new equipment every year – police cars, Gradalls, grapple trucks.

"We've done it for years and we haven't raised taxes and we haven't borrowed money. Over the last 10 years, we've gotten hundreds of thousands of dollars' worth of grants to enhance our quality of life."

The list of grant projects being carried out now or scheduled is overwhelming:

$3 million in CDBG disaster recovery grants to acquire property damaged by prior flooding; 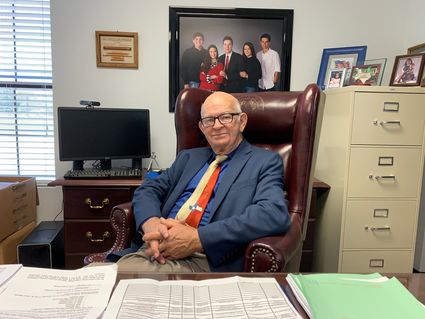 Roy McDonald is retiring in May after serving as West Orange's Mayor since 1995. The photo behind him in his City Hall office is of his five grandchildren.

There's even a grant to help with purchase of a new fire truck.

McDonald points out West Orange, with 27 paid employees, has always gotten the most out of city moneys.

"For 23 consecutive years, we have been selected and received the Government Financial Officers Association Award for Excellence in Financial Reporting," he said.

"Also, our employees' benefit package is as good as any city our size."