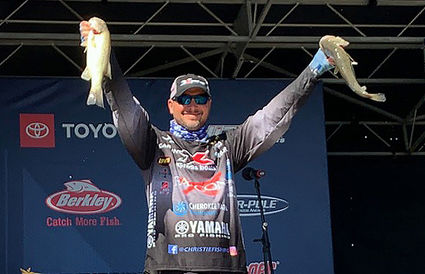 Jason Christie of Park Hill, Oklahoma, was the winner of the Bassmaster Elite on The Sabine fishing tournament held Thursday through Sunday at the Orange Boat Ramp. The tourney, along with the Orange County River Festival, free concerts, Art in the Park and antique car show, provided plenty of opportunity to enjoy a sunny weekend.

Downtown Orange and the west bank of the Sabine River were jumping over the weekend, filled with folks out to enjoy great weather and fun wherever one looked.

The bass tournament based at the Orange Boat Ramp Thursday through Sunday – officially titled the Dovetail Games Bassmaster Elite at Sabine River – turned out the most fishing fans in the 15-year history of the nationwide series, 40,107, Orange County Judge John Gothia said.

But that was hardly the only must-see event drawing a weekend crowd.

The city's Convention and Visitors Bureau hosted both Art in the Park and an Antique Car Show downtown, about six blocks from the boat ramp.

"Orange was ready to get going again," councilman Brad Childs said. "Bassmasters. Art in the Park. The car show. Everyone was so excited. Everyone was smiling."

The weather was awesome, which is what organizers hoped for when Gov. Greg Abbott ended Texas' restrictions on outdoor gatherings and the tournament was moved back to its original date after having been postponed until at least August.

"Anytime you get four days of great weather, that helps the numbers, that helps everybody enjoy themselves and helps all the activities that we planned for the four days to be able to go through without having any bad weather delay or stop it."

Oklahoma native Jason Christie was officially the biggest winner, taking home a $100,000 check and a big trophy with a four-day total of 43 pounds, 15 ounces.

But after a year of quarantining and social distancing because of novel coronavirus COVID-19, folks were ready to cut loose.

"It was wonderful," Orange councilwoman Terrie Salter declared. "We needed this in our city. It was amazing.

"We're on a great start. Orange seems to be back on track. Things are moving forward, and I'm excited about what's next for us."

The Greater Orange Area Chamber of Commerce was in charge of lining up the entertainers, vendors, concessionaires and carnival rides at the Orange County River Festival at the boat ramp, a free event that traditionally runs alongside the spring fishing tournaments.

"Let's face it," Ida Schossow, Chamber President, said, "we couldn't do it without volunteers."

New to this year's events was the Riverside Pavilion, a covered stage and event center built by the city with some help – including fencing – provided by the county. 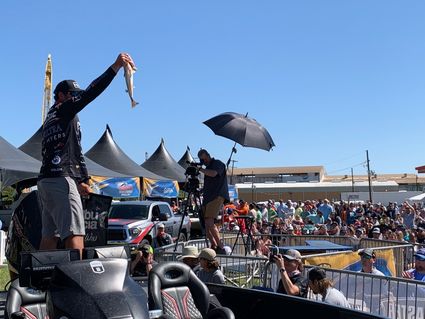 "The pavilion is perfect," Gothia declared. "We got to test it for three nights with different types of music and different power requirements. [Saturday] night, with Neal McCoy's group and the night before with Bag of Donuts, we really turned up the power and it all worked great.

"I'm just glad to be back out and able to do stuff again."

Orange had set the all-time attendance for Bassmasters Elite tourneys with a crowd of 33,600 the first time one was held here, in March of 2013.

"All these places that host Bassmaster Elite tournaments come to Orange to see what we're doing," Gothia said. "Our model here, with the carnival and music, has now been copied around the country. And you know that right now, Waddington, New York is taking aim at us again."