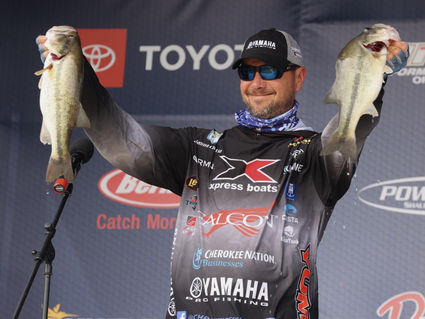 With a two-day total of 28 pounds, 15 ounces, Jason Christie of Park Hill, Okla., is leading after Day 2 of the 2021 Dovetail Games Bassmaster Elite at Sabine River sponsored by Bassmaster Fishing 2022 – the official video game of B.A.S.S.

With a two-day total of 28 pounds, 15 ounces, Jason Christie of Park Hill, Okla., is leading after Day 2 of the 2021 Dovetail Games Bassmaster Elite at Sabine River sponsored by Bassmaster Fishing 2022 – the official video game of B.A.S.S.

Putting significant distance between himself and the rest of the 98-boat field, Jason Christie amassed a two-day total of 28 pounds, 15 ounces and took over the Day 2 lead of the 2021 Dovetail Games Bassmaster Elite at Sabine River sponsored by Bassmaster Fishing 2022 – the official video game of B.A.S.S.

"The water was high and the current was ripping in there and I'm starting to think that the best thing to do is just cover water when it's high," Christie said. "Tomorrow, I might go up there and it might be low and the current's slowed down and I can catch them flipping again. I'll just have to see what happens when I get there."

Christie had previously visited his general area when the Elites last visited the Sabine in 2018. Expanding his waters led him to greater opportunity.

"I just didn't go far enough the last time we were here, and it seems like they're tucked in there a little ways," Christie said. "I had practiced up there and, honestly, I had written it off, but I got home and looked at Google Earth and there was one place I hadn't been.

"The bites I had in other places had been one here, one there, so I needed a place like I found that had a lot of fish."

Christie has the place to himself, but that's largely because of the daunting run through a winding river peppered with sandbars, floating logs and other day-wreckers. He's running up and back at a cautious 35 to 40 mph.

"I could run faster, but maybe that was a blessing, because as soon as you start thinking you can run up there, you hit something," Christie said. "So, I'm just cruising."

The other consideration is fuel consumption. Christie runs a 21-foot XPress aluminum boat, which is significantly lighter than similar-sized fiberglass boats. To further lighten his load and increase fuel economy, he removed about 150 pounds of tackle from his boat.

Nevertheless, with no fueling options upriver from the takeoff site, Christie had to account for the extra weight of a cameraperson and related gear.

"I ran it in practice and I ran it the first day of the tournament by myself and, both times, when I shut down in my place, I'd have 20.8 or 20.6 gallons left, which is almost half of what I can carry," Christie said. "Today, when I shut down, I had 19.4, so I knew that I had to do some switching.

"I dropped two gallons per hour and cruised at 10 to 11 and it really helped. The best I can figure, I (returned with) 3/4 gallon left."

Christie said his conservative approach was essential for making the Top 49 cut. On Saturday, he'll still carefully monitor fuel flow on his Garmin unit, but he may fish longer.

"Tomorrow, I feel like to have a chance to win I'm going to have to push it a little bit," he said. "But it's very nerve-wracking as far as fuel and getting back."

Day 1 leader Brock Mosley again made the long run to the Houston area, added 12-4 to his opening weight of 15-10 - the event's largest bag - and tallied 27-14. Facing windier conditions today, Mosley was initially planning to remain in the Sabine, but he made a spontaneous call to replicate his first day's game plan.

"I asked a lot of my buddies on tour what they would do; most of them said they would go in a heartbeat," Mosley said. "I made up my mind last night that I wasn't going, but I was sitting there before takeoff and (fellow Elites) Drew Benton and Drew Cook were like, 'Why aren't you going?'

"I said, 'I don't think I can make it,' and they said, 'You know you already have enough to make the cut, you might as well try to win this thing and you're not going to win it over here.'"

Returning to the same bayou on Houston's east side, Mosley again targeted seawalls, docks and shoreline wood with a 1/2-ounce chartreuse/white Z-Man ChatterBait JackHammer with a white Yamamoto Zako trailer.

"I got over there, caught a couple of good ones really quick, left a little before 12 and got back a little after 2," Mosley said. "I actually made it there quicker than I did yesterday, but I gave myself over three hours to get back. It only took me a little over two."

Caleb Kuphall of Mukwonago, Wis., held steady in third place with 22-3. Adding 9-3 to the 13 pounds he weighed in on Day 1, Kuphall returned to the same area and fished a series of small channels off the main river.

"I spent most of my day in there and caught most of my keepers, but it's getting hit hard and I may have to get something else going," Kuphall said. "I caught my biggest fish in a different area with a similar scenario."

Kuphall caught most of his fish on a homemade 3/8-ounce green pumpkin flipping jig with a craw chunk-style trailer. He caught his biggest fish on a spinnerbait.

Marc Frazier of Newnan, Ga., is in the lead for Phoenix Boats Big Bass honors with his 6-6 largemouth that he caught on Day 1.

Seth Feider of New Market, Minn., leads the Bassmaster Angler of the Year standings with 340 points, followed by Patrick Walters of Summerville, S.C., with 331 and Christie with 303.

Bryan New of Belmont, N.C., leads the Rookie of the Year standings with 261 points.

Saturday's takeoff is scheduled for 6:45 a.m. CT at the City of Orange Boat Ramp. The weigh-in will be held at the ramp at 3 p.m., with the Top 10 anglers advancing to Championship Sunday.

Live coverage of the event can be streamed on Bassmaster.com and the FOX Sports digital platforms. FS1 will also broadcast the action live with the leaders beginning at 7 a.m. CT.

The tournament is being hosted by the Greater Orange Chamber of Commerce.

B.A.S.S., which encompasses the Bassmaster tournament leagues, events and media platforms, is the worldwide authority on bass fishing and keeper of the culture of the sport, providing cutting edge content on bass fishing whenever, wherever and however bass fishing fans want to use it. Headquartered in Birmingham, Ala., the 515,000-member organization's fully integrated media platforms include the industry's leading magazines (Bassmaster and B.A.S.S. Times), website (Bassmaster.com), TV show, radio show, social media programs and events. For more than 50 years, B.A.S.S. has been dedicated to access, conservation and youth fishing.