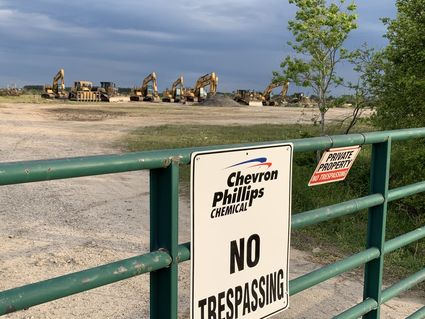 Excavators and bulldozers are parked at the edge of newly cleared land on the west side of property near Texas 87 purchased for a proposed Chevron-Phillips Chemical ethylene plant.

Commuters between Bridge City and Orange have probably noticed a lot of activity on the pasture land between Texas 87 and Foreman Road.

The owner of the 1,700-acre property located across Farm to Market 1006 from the original Chemical Row, is, of course, Chevron Phillips Chemical.

The petrochemical giant based in the Houston suburbs began acquiring the land in 2018 and announced in early 2019 that it was considering building a $5.6 billion multi-unit ethylene plant expected to generate $50 billion in area economic output over 20 years.

In February of 2020, Orange County Commissioners voted unanimously to approve a 10-year, 100% tax abatement contract with the company if the company decides to expand here.

CPC's Chaney Moore predicted a go or no-go decision by the company in late 2020 or early 2021.

Then, within weeks, the entire world pretty much shut down because of the coronavirus pandemic. It caused material shortages and high prices at the same time a glut of unregulated oil resulted in massive shutdowns and layoffs in petrochemicals.

So CPC has been a holding pattern when it comes down to an FID, or final investment decision along with their partner in what they call USA Gulf Coast Petrochemical Project 2, Qatar Petroleum.

"We have not taken up the FID at this time," said Steve Wardle, executive director at CPC. "We have successfully completed our FEED (front end and engineering design) phase.

"Along with Qatar Petroleum, Chevron Phillips Chemical and our stakeholders continue to monitor economic developments, which have had some uncertainty caused by COVID-19 and the price of crude" oil.

Back in February 2020, Moore, real estate and property manager for CPC, said to expect the company to clear its large property bordered by the Orange County Airport and

That's what is going on now.

"It's a land improvement project," Wardle said. "The land we've acquired continues to be the preferred site if we go ahead with this project.

A close look along the fence lines of the property in the past couple of weeks has revealed vegetation and trees uprooted by machines, scooped up by machines and shredded by more machines.

Clearing the property has revealed an array of drainage ditches running diagonally across the property.

"We will work with the Orange County Drainage District to improve the drainage within the bounds of the land we acquired," Wardle said.

had already spent $60 million on land costs. To that, Hill said, CPC is expected to spend $50 million on business personal property and $100 million on taxable inventories if the decision to build in Orange is reached.

Moore pointed out during his first public appearance representing the CPC project at a West Orange-Cove school board meeting in January of 2019 that his company has been operating in Orange since 1955 on Chemical Row.

Wardle harped on it as well in an interview with The Record last week.

"Orange has been a part of our family for a long, long time," he said.

"We've been working with the county judge and the superintendents of schools and the Orange County Drainage District, and we want to express our thank yous to all of them."