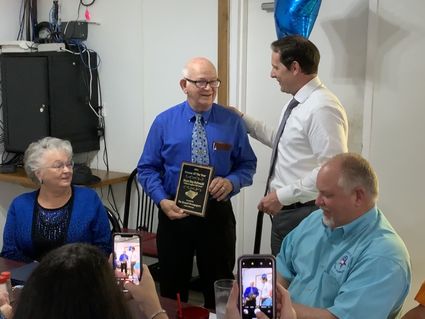 Roy McDonald, retiring West Orange mayor, is presented The Record Newspapers Person of the Year award by Rex Peveto, 163rd District Court Judge, Wednesday, April 14, as his wife, LaVerne looks on during a gathering of the Wednesday Lunch Bunch at Robert's Steakhouse and Meat Market.

No fewer than eight Orange County judges, three county commissioners, one current and one past neighboring mayor and a rando lawyer or two came to Wednesday Lunch Bunch on April 14 to honor retiring West Orange Mayor Roy McDonald.

Roy Dunn, owner and publisher of The Record Newspapers, called the first meeting in 13 months for the Lunch Bunch to surprise McDonald, West Orange's mayor since 1995, as The Penny Record/County Record Person of the Year.

The luncheon gathering, the first since the COVID-19 lockdown in March of 2020, was a joyous occasion for all present in the meeting room at Robert's Steakhouse and Meat Market, some of whom who had not seen one another in a year.

McDonald joked that the room was full of bigger "celebrities" than himself and choked up when presented the award by 163rd District Court Judge Rex Peveto. He said his family deserved to share the honor as they allowed him to serve his community both in elected office and civic volunteerism.

Peveto, who recalled joining McDonald, his wife LaVerne, and children T-Roy and Beverley on a cross-country vacation road trip when he was a youngster, was West Orange City Attorney until he won election to his current job last year.

Retired County Judge Carl Thibodeaux, who was twice named Person of the Year, topped the remaining roster of judges. "Tib" was West Orange mayor when McDonald was elected to City Council in 1987 and is now Municipal Judge for West Orange.

Current County Judge John Gothia sat next to Thibodeaux at the head table, and County Commissioners Johnny Trahan, Kirk Roccaforte and Theresa Beauchamp were among the three dozen people sharing the celebration.

Recently retired Orange City Attorney Jack Smith, The Record's Person of the Year for 2019, was there, as were County Tax Assessor-Collector Karen Fisher and County Treasurer Christy Khoury.

Gothia followed up Peveto's presentation of the Person of the Year Plaque with a proclamation from Commissioners Court honoring McDonald. He also presented one from Texas House Speaker Dade Phelan, Orange County's State Rep. 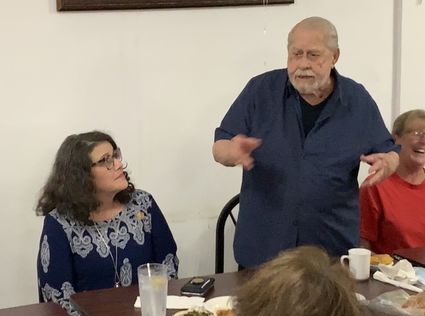 Lanie Brown of U.S. Representative Brian Babin's office and a West Orange resident, lauded McDonald, a DuPont retiree and ordained deacon at his church, for his low-key humanitarian work for his neighbors. Then she read from the Congressional Record a short speech honoring McDonald that Rep. Babin had given on the floor of the House of Representatives earlier Wednesday.

Wednesday Lunch Bunch has been a mostly-weekly happening in Orange for decades now, with community leaders and just regular folks getting together to visit over lunch at different local restaurants. Dunn, who also celebrated the 62nd anniversary of The Penny Record Wednesday, polled the group and it was agreed the next meeting would be held May 19 at Robert's.