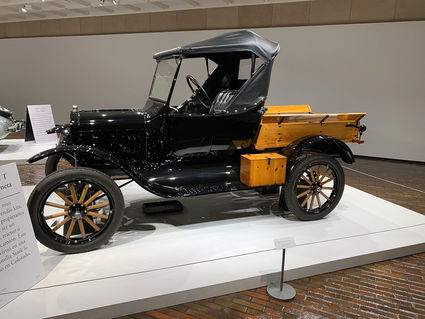 The 1922 Model T Runabout is one of three Stark Family automobiles featured in "Rolling Art," a new exhibit at the Stark Museum of Art through June 19.

What is today the Nelda and Lutcher Stark Foundation began in Orange nearly 150 years with the opening of the Lutcher & Moore Lumber Company in 1877.

But among the many interests of the extended family in throughout the years since, automobiles ranked high.

"The Stark Family was an early adopter of the automobile," Joshua Cole, Education and Program Manager, said Tuesday during a special preview of "Rolling Art: Vehicles from the Permanent Collection" at the Stark Museum of Art.

The exhibit features three early- to mid-20th century automobiles from the W.H. Stark House Collections and they will be on display in the Museum's Gallery 5 beginning today through Saturday, June 19.

The wife and widow of sawmill founder Henry Lutcher, Frances Ann Lutcher, was a prolific traveler.

At age 70, in 1910, she purchased two matching touring cars, one as a backup to the first. She traveled all over North America and Europe, transporting her cars and her traveling companions across the Atlantic via steamship.

"She did an epic trip where she circumnavigated the Continental U.S., over to California, then up to Alaska, back over to the East Coast through Canada, then down the South back to here, at which time was pretty remarkable," Cole said.

A few years earlier in 1905, her grandson, Lutcher Stark, namesake of the family foundation, was the first University of Texas student to drive a car on campus.

Those three cars didn't make the new exhibit, though it features two rarities and one auto legend.

First as you walk into the Gallery is a 1911 Hupmobile Roadster, which was often used for hunting at the family ranch in Colorado.

The others, in order of their creation, are a 1922 Ford Model T Runabout modified to be a truck that the Stark family used at the ranch.

And a car probably few have ever heard of, a 1950 Crosley Super Sport, was a tiny sports car Lutcher Stark drove around Shangri La Gardens in his later years.

"Each of these cars has a different story," Cole said. "We wound up with two very rare ones and probably the most ubiquitous model ever made."

The Hupmobile was built from 1909 through 1939 by the Hupp Motor Car Company of Detroit, which was co-founded in 1908 by Bobby Hupp.

The car, with its high road clearance and light design (1,100 pounds), could travel as fast as 50 miles per hour. It is like the 110-year-old equivalent of an all-terrain vehicle today. If today's modern bush buggy depended on acetylene headlamps to see at night.

"This car was built to compete with Henry Ford for cheap everyman vehicles," Cole said.

"This is an improved version, a Model B or Model C, it's super basic and also very rugged. That combo made them very popular.

"This one spent most of its functional life at the family's Roslyn Ranch in Colorado. It was perfect for the high plains, mountain country, one of the first vehicles to prove the concept of the light, fast, utility vehicle, a really good off-roader. This Hupmobile is in the evolution of both the sports car and the Jeep."

"Of all the Model Ts, this particular body type was the most common," Cole said. "By 1922, you're reaching the point where cars are coming of age, features that little car (Hupmobile) doesn't have, a windshield, even a little windshield wiper, electric lights.

"This truck model is in many ways is where the American pickup concept comes from."

Frances Lutcher bought the ranch in 1907 and the family members spent the summers there annually into the 1970s.

The Model T truck had a top speed of 40 mph and appears in photos from the ranch "pre-restored," Cole said.

"We have a great photo of the Hupmobile being used at the ranch (on p. 154 of the family biography "The Long Shadow," Lutcher and his dad, William Stark, share the Hupmobile with about a dozen pheasants they shot during a ranch hunt)."

Besides being "classic 'barn cars' that sat in storage for decades after their useful lives to appear from time to time in Stark Foundation exhibits, Cole notes they have in common the feature of having a single red taillight."

The Crosley Hotshot Super Sport "was the first postwar American sports car" Cole said, "and this is a rare car. 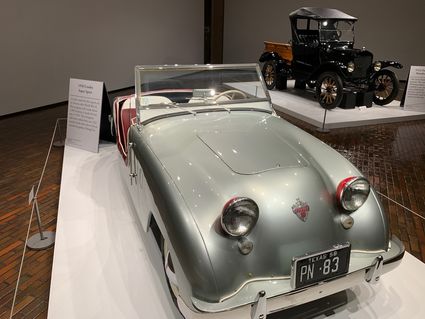 "They were one of the last companies to cease civilian car production and they were also among the first to start up production after the war. They made sort of Euro-style compact cars, a legitimate sports car that could go as fast as 80 mph.

"It's a fun little sports car."

The Crosley on display carries a 1958 Texas inspection sticker. Lutcher Stark used it to get around the nature preserve he built near downtown Orange, at Shangri La.

"It very much fits with Lutcher Stark," Cole said. "It is kind of like a glorified golf cart. You can imagine this thing bouncing around a garden."

The Stark Museum of Art is located at 712 Green Avenue in Orange and is open from Wednesday to Saturday, from 9 a.m. to 5 p.m. Admission is free.