A Year To Remember 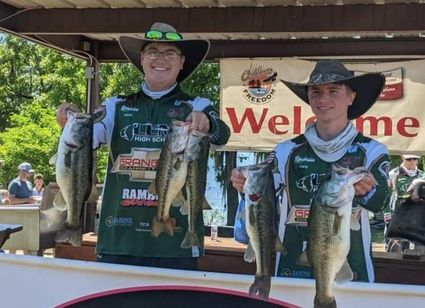 Regardless of what lies ahead for the LCM team of Gavin Cooper and Justin James, this has been a year of bass tournament fishing that neither will ever forget. Simply qualifying for the Bassmaster National High School Championship early on was an indication that it could be a

year to remember, but this duo was just getting started. Winning is tough enough, but it is consistency that keeps you on top and this pair of anglers proved to be the model of consistency throughout the year. In fact, they started strong and only got better! Not only did they earn a check in five of the seven tournaments they fished, but both anglers caught their personal best bass while competing. Not surprisingly, they put the icing on the cake this past weekend by winning the DETX Championship on Sam Rayburn. Their winning two day total weighed 33.01-pounds. That total is even more impressive when considering the fact that not another team broke the thirty pound mark. When all was said and done, James and Cooper also finished their incredible run only one point shy of winning the prestigious DETX Angler of the Year award. I feel reasonably certain that no one is prouder of these two young men than their parents and make no mistake about it, they played a role in their success.Justin's Dad, Joel, was their team captain and he shared not only every road trip and bumpy boat ride, but the thrill of every bass they caught as well. Joel was a better than average tournament fishermen before raising his kids took precedence and I have heard more than one time from his

friends, "It has to just kill him sitting there watching them catch fish when he can't even cast. "Having guided for forty-nine years and taught lots of kids from five to seventy years old to fish, I can promise you that Joel is not suffering from being relegated to full time spectator. Few things are more rewarding than watching another person use something you have taught them to succeed......especially a child! And, while recognizing the fact that genes just might be a contributing factor, Justin's grandfather, Keith Cloessner was a pretty fair tournament fisherman as well.Aside from being someone I always looked forward to spending a day on the water with, he was very much a student of the game. Good luck to these youngsters in the National Championship!

The Sabine Redfish Series kicked off their season last weekend and Mother Nature did her unseasonable best to make things tough on the entire field. There was still a good turnout for the first event, but I am sure it would have been even larger had it not been for the predicted storm that did in fact roar through Friday night. By blast off time Saturday morning, there was little left other than too much wind and some extremely high water. The high water did the marsh fishermen no favors and the wind made open water venues a challenge just to navigate. I talked with several teams that not only trailered to more protected water, but also burned a lot of gas in their outboards to no avail. At the same time, I was surprised at the number of teams that posted twenty pound-plus catches. I was not surprised, however, by the names that made up several of these teams. When the final catch was weighed at the High Tides restaurant in Bridge City, Jeremy Reeves and Tony Viator edged out Ryan Hall and Alan Harrison by a scant two-tenths of a pound. Their three fish catch totaled a very solid 22.77 pounds. Viator said their total could have possibly been even heavier had they not decided to cull a ten pound fish that measured right on the mark. It proved to be a wise decision in that they not only won, but would have been heavily penalized had the fish been a hair too long! The big fish side pot was won by Josh Peterson and Daniel Gates with their 10.38- pound red and Roger and Matt Bertrand caught a fish with eleven spots to earn that pot. Eight of the top ten bested the twenty pound mark and seventeen teams finished with double digit weights.

The next Redfish Series tournament is set for May 22nd .