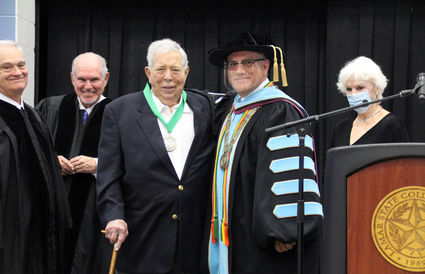 Former Sen. Carl Parker is seen with and in thanks for his faithful stewardship of LSCO over the years

Lamar State College Orange (LSCO) surprised former State Senator Carl A. Parker with its first honorary degree at graduation this Saturday at the Carl A. Parker Multipurpose Center on Lamar State College Port Arthur's (LSCPA) campus, in gratitude for the Senator authoring the legislation that created LSCO and LSCPA and in thanks for his faithful stewardship of LSCO over the years.

"We conferred an all-time Spring record of 263 degrees this Saturday, and none of those life-changing moments would have been possible were it not for Senator Carl Parker. His legislation, and his vision, for a college on the Sabine to transform lives in our community of Orange is one of his many great legacies. We are honored to award Senator Parker with our first-ever honorary Associate's Degree," said LSCO President Thomas Johnson. 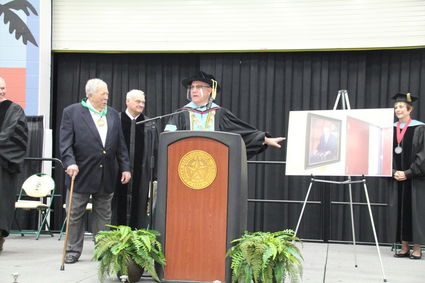 At his induction into the Hall of Fame at the Museum of the Gulf Coast, Parker said of LSCO and LSCPA, "Kids would never have graduated if we didn't have those institutions in their hometowns. If you don't have any method of transportation, you may as well be on the moon."