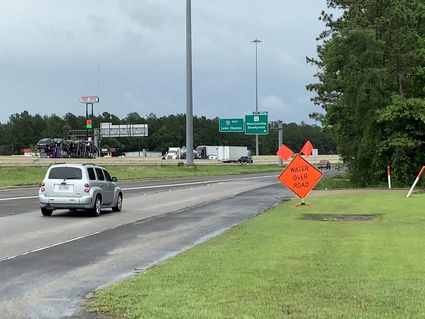 Travelers on the eastbound Interstate 10 service road had to dodge high water near the Highway 12 intersection Tuesday morning.

Though sunshine was abundant Tuesday evening, another stormfront was expected Wednesday.

"Based on what we've been told, [Wednesday] is supposed to be the worst," said Joel Ardoin, Orange County Emergency Management Coordinator.

"The it will start letting up."

In Orange County, a voluntary evacuation was recommended for residents on the western, Neches River side, of the county: the Lake View area including Four Oaks Ranch Road, Loving Acres, Connelly Road and all other low-lying areas of the Neches River in Orange County.

The City of Orange announced Tuesday afternoon it was having to cancel its scheduled Shootout on the Sabine drag boat races, Zydeco concert and fireworks show set for Saturday and Sunday, May 22-23.

"We feel it is in the best interest and safety of the DSRA racers to cancel this event due to unfavorable weather conditions and water levels on the Sabine River," said the release from the Convention and Visitors Bureau.

The Sabine River Authority dam at Toledo Bend has had all 11 floodgates open one foot since Sunday, reducing the water flow from 33,000 cubic feet per second (11 gates open three feet each) last Tuesday to 11,000 cfs Tuesday, May 18.

Weeks noted flooding had occurred throughout Jasper County after heavy rainfall Sunday, Monday and Tuesday and noted the danger from subsequent releases from the SRA dam.

He said a release "is expected to result in flooding that has great potential of causing severe bodily injury or the loss of human life in the low-lying areas of the Sabine River corridor in Newton County."

As of 6 p.m. Tuesday, the Sabine River at Deweyville was nearly three feet above the 24-foot flood stage, at 26.9 feet and was expected to peak at 27.1 feet Sunday, still below the 28-foot major flood stage.

The Neches River at the Salt Water Barrier (north of I-10) was at 6.4 feet Tuesday evening and expected to crest at 11 feet Sunday. That's just upstream of Four Oaks Ranch Road, where water is over a roadway the county has been slowly rebuilding in recent years.

"It looks like the west side of the county is getting the worst of it. Toledo Bend has, at this point, missed the worst of the rain.

"The people who live along the [Sabine] river have already experienced water, but it's over below [Lake] Sam Rayburn, at Town Bluff, where they're releasing now.

"It's not going to be anything like [Hurricane] Harvey, but those folks are going to have to boat in and out, for sure."

Orange County officials were monitoring the flood levels on both the east and west sides of Orange County in the low-lying areas.

To monitor the lake, river and flood stage levels for the Neches and Sabine Rivers go to http://www.setexasrain.org/

Sand and bags are available at the following Orange County locations:

-11897 State Hwy 62 in Mauriceville directly across from Market Basket on Hwy 62;

Residents are welcome to bag the sand, but should bring their own shovels.

The Emergency Management Office offers these reminders from the Texas Department of Transportation:

There are many dangers of driving into flooded roadways. When there is water across a road, drivers should always turn around and choose a different route. TxDOT has the following tips:

-Six inches of water can cause tires to lose traction and begin to slide.

-Twelve inches of water can float many cars. Two feet of rushing water will carry off pick-up trucks, SUV's and most other vehicles.

-Water across a road may hide a missing segment of roadbed or a missing bridge.

-In flash floods, waters rise so rapidly they may be far deeper by the time you are halfway across, trapping you in a vehicle.

-Flash floods are especially treacherous at night when it is very difficult to see how deep waters may be or how fast water is rising.

-Floodwater weakens roadbeds. Drivers should proceed cautiously after waters have receded, since the road may collapse under the weight of the vehicle.