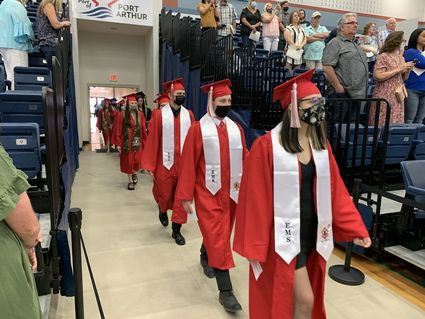 Dr. Thomas Johnson, President at Lamar State College Orange, never misses a chance to express how important the role of a two-year college can be.

And at the school's Spring 2021 Commencement, he saw over and over the proof.

A spring semester record 175 students graduated and received their associate's degrees, or certificates of completion in two ceremonies held Saturday in the Carl Parker Center in Port Arthur.

Among the graduates were the first LSCO Early College High School graduates. They earned both their high school diplomas from West Orange-Cove CISD and a two-year associate's degree from LSCO that will enable them to continue their education by jumping from high school senior to college junior if they so desire.

Other students from the area's high schools earned dual credit via LSCO, knocking out courses for which they earned credit both at their high school and to apply to a college degree.

"This is the first face-to-face graduation we've had since December 2019 and it is so beautiful to see your faces," Johnson told the students before they flipped the tassels on their mortarboards.

"Not only is this the largest spring graduating class in Lamar State College Orange history, it's 40 percent larger than the spring class of last year.

"You see different colors in caps and gowns. The reason why is these young men and women are still in high school. They're gong to get a certificate or award or degree before they actually finish high school.

"But I love that they're wearing their high school colors. That way you can see that because we're working with school districts, we can give you a head start."

"We couldn't be prouder of what these students have accomplished as our first graduates of our Early College High School program. The sky is the limit for these Gators."

Johnson surprised Parker, who wrote the legislation that brought LSCO into existence, with the very first honorary degree ever awarded by the Orange institution.

Parker thought he was there to honor Scott, a longtime friend.

"How great is that?" Johnson said. "That we get to celebrate the individual that wrote the legislation that created the college 50 years ago?

"That's pretty neat," he said as the students, faculty and guests applauded.

But he hasn't been surprised by the success of LSCO, or LSC Port Arthur, which became eligible for state funding with the creation of the Lamar University System.

"I knew it would be successful," he said Saturday evening. "The naysayers said we'd never have more than 250 people attend these places. They were wrong.

"The great thing that really fills me with pride is to see the young people [graduate]. It's just a great feeling."

Johnson, the LSCO leader, was the first in his family to graduate high school and he started a path to the five college degrees he holds at a two-year school.

So he was happy to share some stats with the new graduates. And with Parker.

"And you are record-breakers," he said. "Seventy-eight percent of our graduates here are first-generation."

Then, looking at Parker, Johnson said, "It's because you had the foresight to put a two-year school that was close, so that we could learn skills, trades or go on to university."