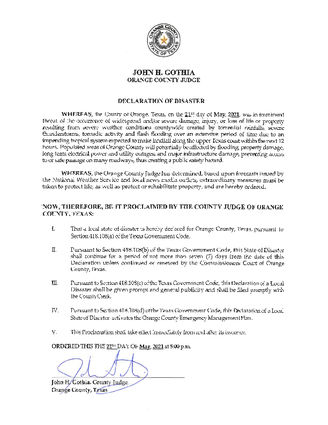 County Judge John Gothia issued a Declaration of Disaster for Orange County at 5 p.m. Friday, citing the 'imminent threat' created by an impending tropical storm system expected to make landfall along the upper Texas coast "within the next 12 hours."

Storms this week have saturated Southeast Texas and both the Neches and Sabine Rivers are already above flood levels.

At dinner time Friday, the National Weather Service was tracking "a well-defined low pressure system over the western Gulf of Mexico" that "may result in the formation of a short-lived tropical depression or storm before the system moves inland over the northwestern Gulf coast tonight."

NWS said the system could produce heavy rainfall over portions of southeastern Texas and southwestern Louisiana through Saturday. Given the complete saturation of soils with ongoing river flooding along the Texas and Louisiana coastal areas, heavy rain could lead to flash, urban, and additional riverine flooding across this region."

The disaster declaration stated the county "was in imminent threat of the occurrence of widespread and/or severe damage, injury, or loss of life or property" and that "the Orange County Judge has determined ... extraordinary measures must be taken to protect life, as well as protect or rehabilitate property, and are hereby ordered," so Gothia activated the Orange County Emergency Management Plan.