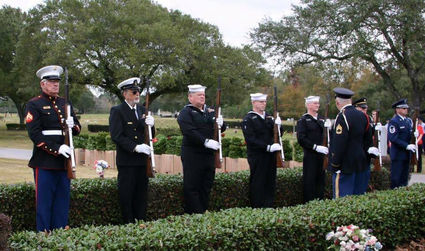 John Hall, third from left, prepares to join other members of the Southeast Texas Veterans Group in a 21-gun volley as part of a recent veteran's funeral service.

Charlie Dubois of Little Cypress said it was the 2012 funeral for his father-in-law, Earl Bilbo, that moved him to put his U.S. Army uniform back on and assist at funerals.

And Monday they will both be in Beaumont for a 10 a.m. Memorial Day Service at Forest Lawn Cemetery, 4955 Pine Street.

As the country and the state opens up after a year of COVID-19 lockdowns, it's the only area Memorial Day observance, according to the two vets.

The STVG Honor Guard will perform its POW/MIA ceremony to remember those lost in American military actions.

"Usually there's not a dry eye in the house – including the vets taking part in the ceremony," said Hall, who served 20 years in the Navy, mostly aboard an aircraft carrier, and numerous deployments in the Gulf War.

The ceremony will include several speakers and the STVG Honor Guard will also offer a 21-gun rifle volley and play Taps at the end of the tribute.

Hall and Dubois are among about 50 members of the STVG, which was formed in 1988. Besides special military remembrances to mark Veterans Day and Memorial Day, the group's main mission is working with area funeral homes to provide military honors for those Southeast Texans who served their country in uniform.

"The military used to provide full military honors for all veterans, but now it's only for the high-ranking officers," said Dubois, once a combat engineer in Vietnam.

C.P. Williams, a retired Marine from Jasper County who was in the first uniformed American fighting force to land in Vietnam in 1965, is the group's funeral coordinator.

This has been "an extremely busy year" for the Honor Guard, he said.

"As of today, we've been in 146 funerals this year," he said Tuesday after a service in Vidor.

"We used to do funerals for World War II vets, but we don't have many of those left alive. We're starting to get a lot of funerals for Korean War and Vietnam vets."

Williams says the goal is to have a group of nine or 10 Honor Guard members at each funeral, including a seven-man rifle team.

"We were shut down for four months by COVID," he said, recalling that social distancing rules didn't allow traditional funerals to be held for much of 2020.

"Then we cut back during the pandemic to a three-man rifle team, just to limit exposure. Three is the minimum amount I can use for a rifle team."

While most of the Honor Guard members are retired and the average age is over 60, Hall, 56, is still working full-time at the U.S. Reserve Fleet anchored in the Neches River, not far south from Lamar University.

Hall, whose active duty jobs included loading bombs on carrier aircraft and keeping track of ammunition on board, is in charge of maintaining the STVG ceremonial weapons.

They use M-1 Garand rifles, which were standard issue in World War II and Korea, and fire .30-caliber blanks.

He says a 21-gun salute is reserved for dignitaries, "like the President or Vice President." But the STVG's 21-gun volleys is similar in that it is seven riflemen firing three shots each. 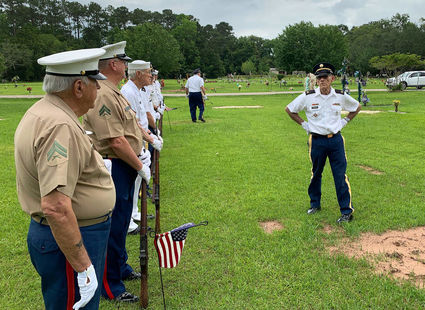 Charlie Dubois, right, visits with other members of the Southeast Texas Veterans Group honor guard prior to a veteran's funeral in Vidor Tuesday morning.

"We call it a volley, and you can have three men or seven on an Honor Guard," Hall said. "Three volleys is three rounds of shots."

All of the STVG members are volunteers and all pay for their travel to and from events, which include funerals as far away as Silsbee and Winnie.

Their uniforms, which include winter and summer wear, are provided by the group, with funds raised through donations.

"I joined because I wanted to pay back those who sacrificed for this country," Dubois said, "to give their families some comfort.

"When I first started, it was very emotional for me to see the family grieving."

"It's not about me or our group. It's for the veteran who has passed away. If not for the veteran that went before me, I might not have been able to do my duty," Hall said.

"A lot of them, who served in Vietnam, Korea or World War II, I look up to those guys who sacrificed a lot."