After 70 years Baseball still presents some firsts for me 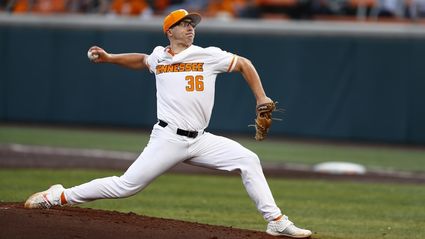 On Thursday, Orange's Chad Dallas was on the mound for the Volunteers against Mississippi State and had another quality start (his 12th out of 14 starts) and left the game after six innings leading 5-2.

One of the first things I learned to do in baseball as a Little Leaguer after hitting, throwing and catching the ball was how to properly slide gracefully into a base on my bottom.

Taking it one step further was the importance of sliding into second base in an effort to break up a double play.

When I was in high school our coach was adamant that we spend at least 10 minutes before each practice sliding in the high jump pit.

When I was playing in the 1954 Little League World Series in Williamsport, PA., I was trying to go from first to third on a single to right field.

Not being a speed merchant, I had to a hook slide into third base to avoid the tag. United Press International snapped a photo of the slide that went to newspapers all over the world with cutlines commending the evasive slide.

Baseball, at least in college, must have altered the sliding rules I learned because I saw the Tennessee Volunteers get deprived of a victory over Alabama last Wednesday in a Southeast Conference post-season tournament game on a slide into second base on a double play attempt.

Setting the situation, the score was tied 2-2 in the bottom of the ninth inning with one out and a Tennessee runner on third base. Alabama's coach ordered the next two Vols hitters intentionally walked to load the bases to either have a force out at home or an inning-ending double play to send the game into extra innings.

The Tennessee batter hit a grounder to second, who tossed to the shortstop for the force out, but the relay to first was very late and the winning run scored for the Vols.

This produced high fives, back slapping and even a pile of Vols players on the field celebrating the 3-2 win.

A couple of minutes later the umpires halted the celebration and said they were calling interference on the baserunner sliding into second base saying his hand was outside of his body barely brushing the shortstop and declared the batter also out, ending the ninth inning with the score still tied at 2-2.

Several minutes had expired as the umpires on the field were in communication with the head honchos in New York, who eventually upheld the decision.

My question is how can a runner slide into a base keeping his hands and arms inside his body stiff as a two-by-four? I've never seen it happen, nor has anyone that I talked to about it.

The answer to this situation may sound like sour grapes, but think if it-Tennessee was playing Alabama at the SEC playoff site in Hoover, Alabama with umpires from the Alabama area. Sounds like a home decision to me!!!

And as fate would have it, Alabama scored a run the next inning as won the game 3-2 to stay alive in the tournament.

On Thursday, Orange's Chad Dallas was on the mound for the Volunteers against Mississippi State and had another quality start (his 12th out of 14 starts) and left the game after six innings leading 5-2.

The adrenaline must have been flowing in the Vols' dugout because they scored seven more runs and beat the Bulldogs 12-2 on the tourney's 10-Run Rule and advanced to the next round.

And guess who Tennessee was scheduled to play on Friday? Yep, those same Alabama Elephants who shystered the victory from the Vols two days ago.

The Vols must have been fired up for the encore, because they laid a 12-0 Ten Run Rule hickey on the Crimson Tide, eliminating them and making them permanent fans for the rest of the tournament.

Saturday's semifinal elimination game against sixth-seeded Florida resulted in a 4-0 blanking of the Gators as Tennessee became only one of a couple of teams to register back-to-back shutouts in an SEC tournament.

This set up the championship game Sunday between the No. 2 Vols and top-seeded Arkansas which the Hogs won 7-2.

Both Arkansas and Tennessee will host this week's World Series Regionals along with Texas and Vanderbilt with the Vols also slated to host next week's Super Regionals if they win their own regional tournament.

Host Tennessee will play Wright State Friday at 5 pm in Knoxville while Duke and Liberty open the NCAA Regional Tournament at 11 am.

The Tennessee baseball team, which has won 45 games this season, has 21 come-from-behind victories to its credit.

The Seattle Seahawks are talking to Atlanta Falcons wide receiver Julio Jones about joining their team. Quarterback Russell Wilson would love to have Jones as one of his targets this fall.

The Detroit Tigers 6-2 win over the New York Yankees Sunday gave them their first home series sweep over the Bronx Bombers since 2000.

And Baltimore's 3-1 loss to the Chicago White Sox Sunday gave the Orioles a 13-game losing streak, their longest since 2009.

Albert Pujols, who wasn't good enough to play for the cellar-swelling Los Angeles Angels, homered in back-to-back games for the LA Dodgers for the first time this season. He passed Babe Ruth for fourth place in career extra base hits with 1,357.

A tip of the corner Kap to my alma mater McNeese State for winning the Southland Conference Baseball Tournament last weekend as the number 7 seed. The Cowboys beat Sam Houston State 2-1 in Saturday's championship game. The Cowboys are now headed to the NCAA Regional Tournament at Dallas Baptist and will play TCU in Friday's opening round.

JUST BETWEEN US...Another baseball first for me involves our Houston Astros and their pathetic bullpen. Houston was either ahead or tied in the eighth inning against the major league's winningest team--the San Diego Padres--in all three games last weekend. The relief pitchers allowed a combined 22 runs in those three games, with the Astros feeling fortunate to win only Sunday's game thanks to their ace Zack Greinke, who pitched eight innings for the third time this season to tie for the most in the MLB and left the game leading 7-1. The Padres hit two ninth-inning home runs and had the tying run at the plate before losing 7-4. The Astros close out their nine-game home stand against the red-hot Boston Red Sox in a four-game series that began Monday and ends tomorrow.