Spinnerbaits are a muddy water weapon 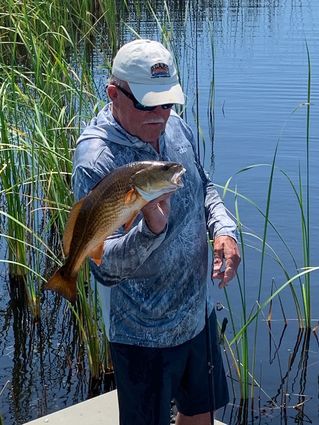 Any tackle geek knows they are the next great weapon in the angling arsenal, saltwater spinnerbaits have come to the coast and the redfish have a new enemy. They come in array of different colors and each one does a little something different that sets it apart from the competition. Truth be told there are 2 basic styles and they both do a great job catching fish. The most common style is the "safety pin" style, famous in bass fishing circles and the one most known by Texas anglers. The other is the "in line" version, a recruit from the north that was made famous on walleye lakes. Both of these baits have come to the tackle forefront and are producing excellent catches of several saltwater species, most notably redfish.

For many years several of the guides on Sabine Lake, including myself, fished clients on both Sam Rayburn and Toledo Bend as well as Sabine. Over the years we found several baits that crossed the line from fresh to salt and produced in both environments. Plugs like the Rat-l-trap, Rogue, tube jigs and others stayed in our tackle boxes no matter where we fished. The spinnerbait joined that list when we found out we could catch largemouth bass and redfish in the same brackish water marshes that surround our area. Many times while night fishing on the Sabine River we caught mixed stringers containing both bass and redfish, the bait worked so well we turned our friends and clients onto the program. Now the rest of the fishing world has come to know the secret that many Louisiana anglers have known for years, the spinnerbait has a place in saltwater.

The typical pattern for using spinnerbaits in saltwater involves off colored water where sight fishing is difficult. The thump or vibration that blades put out is a top choice fish finding tool. Not only does the spinnerbait vibration make it easier to find fish you can cover plenty of water with the bait as well. A perfect example would be the "speed method" that B.A.S.S. angler Kevin Van Damm applies, he makes hundreds more cast than other guys on tour because he fishes his spinnerbaits so aggressively. By covering so much water you can rule unproductive areas quicker and with more confidence.

Now the spinnerbait can also be used in the clear water as well, they will catch fish in these conditions also. In the marshes around Sabine and Calcasieu we will routinely throw spinnerbaits at redfish we can see. A favorite technique is to pull the spinnerbait up to the fish and vary the retrieve by either allowing the bait to fall or "helicopter" down or to twitch the bait causing the skirt to flare out and mimic a wounded fish. Both of those techniques will result in bone jarring strikes from hungry redfish.

There are several different things you can do to an average spinnerbait that will make it more attractive to redfish. The most common is to remove the synthetic rubber skirt and replace it with a soft plastic; something with a paddle type tail is preferable. The combination of the blades and the paddle tail will put out extra vibration and the profile will look like a small shad or mullet, a winning formula to say the least. If you use a skirted spinnerbait you can also add a foam earplug or piece of sponge along the shank of the hook, this will add profile, buoyancy, and also hold any type of scent or attractant much longer.

The spinnerbait is an age old lure that has found a home in saltwater and should also have a home in your tackle box. Give them a try because they will certainly make you a better and more productive angler.