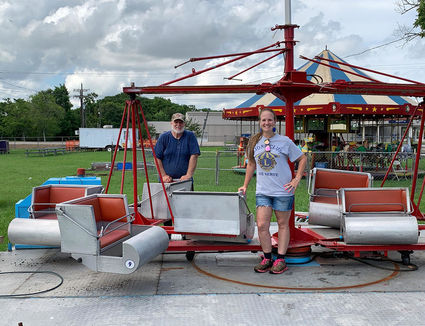 Good times are set to resume in Orange.

“When we first started planning for this, they still had the COVID thing,” Pam Crew-Honeycutt, carnival co-chairman explained the extra week. “We were trying to encourage more social distancing. We thought it would give people the opportunity to spread out.”

This year’s event begins at 6:30 p.m. Wednesday and runs Wednesdays through Saturdays, ending on July 3.

Kiddie Day is Saturday, June 19, with gates opening at 4 p.m.

New this year is a Kiddie Scrambler for the young ones and a rock climbing wall for the more adventurous.

More than 10,000 people visit the fair annually, many of them more than once.

“We have people from out of town who grew up here come back every year to the carnival,” said Kristy Burnitt, Orange Lions Club president and co-chair of the carnival along with Crew, a past club president.

Admission is $3 for adults, $2 for students aged 10-17 and youngsters under 10 are admitted free.

Proceeds of the carnival will be used by the Lions Club to fund club causes like the Eyeglass Bank, scholarships for youngsters to Lions Club Camp, food baskets and their beautification tree project and the Texas Ramp Project.

“We couldn’t do this without volunteers and different businesses coming out to help,” Burnitt said, listing Akrotex, which used its trucks to bring the club-owned rides from storage to the park on the shore of Adams Bayou.

“Dow is very good about sending volunteers, and so do a lot of non-profits,” Burnitt said. “Most credit unions get groups together and Lamar Orange’s nursing students are big helpers.

Traditionally, the fair has been held in the fall, but recent years have featured two of the worst rainstorms in U.S. history in the fall and the 2020 carnival was canceled by the coronavirus pandemic, with a couple of hurricanes thrown in for good measure.

“A lot of people love this carnival, because it’s a fall carnival,” Crew said. “We’d love to move back to the fall, but the last three years, we’ve either had hurricanes or threat of hurricanes.

“It’s hard to put up a Ferris Wheel and leave it up in 160 mph winds like we had last year.” 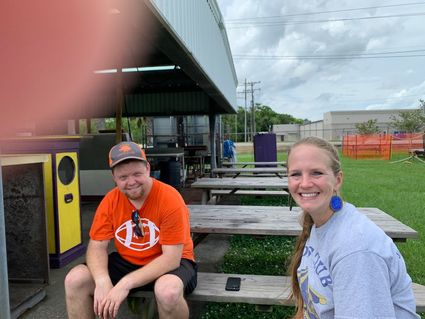 “We haven’t had a real good one since I’ve been a Lions Club member, and I’ve been a member for four years,”

Burnitt said. “We always have at least a few days canceled by rain.”

Chris Kovatch, a Lions Clubber who also is this year’s chairman of the Greater Orange Area Chamber of Commerce, was among the members out setting up rides last weekend.

He couldn’t pass the opportunity for some dark humor.

“Our new fund raiser will be, ‘If your city is in a drought, we’ll bring our carnival to you,’” he said. “Then, you’re guaranteed rain.”