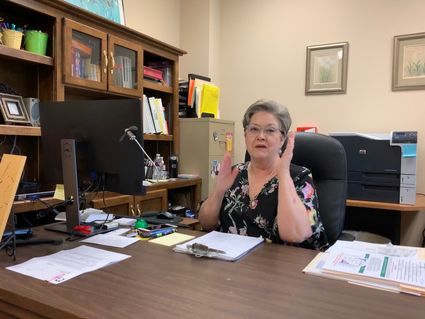 One of Orange County’s top news sources is going off the air.

Sherry Combs is retiring from the Little Cypress-Mauriceville school district Friday, ending a 42-year career that saw her issue tens of thousands of notifications –what used to be called “press releases” – on behalf of LCMCISD and West Orange-Cove school districts and the LifeShare Blood Center.

For the past 20 years, Combs has been LCM’s Community Relations Coordinator. The title was originally going to be longer, “but I told them I needed something that would all fit on one line,” she said.

Combs was not only the district’s public information boss, the contact person for delivering news to and answering questions from reporters and newsrooms of the traditional media, but also a whiz at the new media landscape.

She was deeply involved with the district’s websites and Facebook page, and able to send texts, tweets and email breaking storm news or new bus routes to students and their parents at the click of a computer mouse.

For LCM, Combs also established an Educational Foundation for the district to generate extra classroom support for its teachers and students.

“That has been one of my most proud accomplishments,” said the graduate of Stark High and Lamar University.

“Over the years, the Foundation has given hundreds of grants for classroom projects to teachers throughout the district totaling almost $300,000. They hold two big events during the year to raise money, the Beary Merry Christmas Market and the 5K Color Fun Run.”

Combs started the LCM Awards program where Distinguished Alumni, Hall of Fame and a Military Wall of Honor inductees are recognized.

“Schools make a difference in the life of the whole community,” she said. “I see myself as a facilitator. If we know of a need, if there’s a program going on at one campus that needs something from the community, I can help round that up.

“I facilitate you guys [media outlets] getting the information that you need, and that helps us. If I can get the information of what’s going on at the campus out to the media, that’s my job.”

Singing was Combs’ passion growing up. Her college degree is in vocal music. She met her husband, Mike, in vocal music classes at Lamar.

“Everything I’ve done professionally has been PR-related,” she said, “but I’ve taught voice, directed church choirs and performed for OCP [Orange Community Players].”

When Mike was drafted into the Army, she moved with him to Washington state. The couple had two children, Doug and Liz, by the time they moved back to Texas.

“We raised two kids who are singers and used to sing together as a family. That was great fun, singing with your kids.

“Now, I just make a joyful noise from the pews at First Presbyterian.”

Besides being a wife and mom, Sherry took her first for-pay job with the West Orange-Cove district, serving as coordinator for volunteers.

“The last couple of years, they also added PR to my responsibilities,” she said.

Combs left schools for a six-year stretch working for LifeShare Blood Center as the Public Information Officer and Donor Recruiting Coordinator for an area stretching from Beaumont to Lake Charles.

“And I just missed working for a school district. Even though LifeShare was still non-profit work and we were serving people, I just missed education.

“Then LCM advertised for this job and I applied.”

Combs recalls that when she started working in public relations, she typed on an IBM Selectric typewriter and to send out a press release meant folding it into an envelope and snail mailing it.

“If it was really important, I’d drop it by the newspaper office.”

Taking photographs of events was part of Combs’ job before most reporters were required to do the double duty of writing and transmitting both words and visual images.

“Even when I started at LCM, we were still using film when you were taking pictures,” she said. “If you were covering things that needed photos, you had to go get film developed, whereas now, I just pop my memory card in my computer.

“Digital cameras have really made a difference. And I’ve gotten a lot better with PhotoShop over the years.”

The biggest change in four-plus decades hasn’t been in methods of news delivery, but in the speed and importance. Weather disasters and the COVID lockdown of 2020-21 have forced many quick pivots by education leaders.

And Combs has had to get the word out.

"We were out for about a month after Harvey,” she said, mentioning the 2017 hurricane that flooded most of the district’s campuses. “And then we had the [COVID-19] pandemic and had to switch to virtual classes. 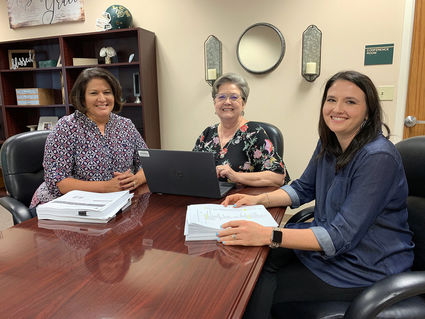 “We’ve got over 3,000 kids in the district and their parents need to know what’s going on in an emergency. We now have the ability to contact all of our staff, all of our parents in just minutes, through school messenger programs.

“I’ve done a lot of that in the past few years with hurricanes and through the pandemic. That takes up a lot more time than people think.”

And now it’s Sherry’s time to take some time.

Husband Mike has retired from DuPont and the couple have five grandchildren, a grandson-in-law and two great-grandchildren to watch grow up.

"Mike and I have a trip planned to visit friends, see some sights,” Combs said. “Beyond that, I haven’t decided yet. I’m going to kind of lay low for a while.”