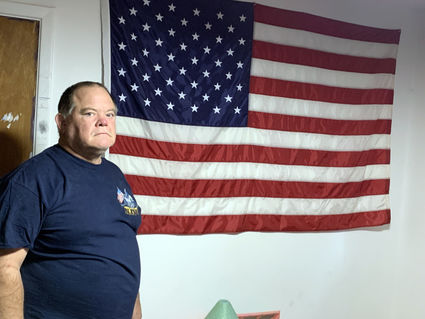 Monday, June 14, marks the 104th observance of Flag Day in the United States, a holiday officially established in 1916 by President Woodrow Wilson.

“When we first got married, my wife asked me, ‘Why is that flag so important to you?’” Hall recalls.

“I told her it’s just respect for the country I fought for. It’s imbedded in me from the military.

“For 20 years, I had to salute the flag every time I went on or off my ship. We all stood and saluted it in the morning and saluted it again at the end of the day when they blew ‘Taps.’

“When you go overseas [to another country], you have to stand at attention for their flag, then for your flag. I got wrapped up a little more in it [respect for the flag]. The flag reminds you why you’re over there.”

You’re the emblem of the land I love,

The home of the free and the brave.

America’s first official flag of 13 red and white stripes with a star for every state on a field of blue was adopted on June 14, 1777.

“It’s a national emblem,” Hall said, “and the colors have meaning: The red is for blood shed, white is for purity and blue is for bravery.

“Those are the things I stood for when I was in the service. And I have relatives who are still standing for them – one nephew is in the Army, one is in the Air Force.

“They’re still carrying on the tradition.”

Hall now works at the U.S. Reserve Fleet on the Neches River, near Nederland. He is a caretaker for the mothballed battleships, aircraft carriers and other naval vessels waiting to be scrapped for parts.

He hasn’t slowed down a bit, though, spending his free time as chaplain of VFW Post 2775 in Orange and a member of the Southeast Texas Veterans Group Honor Guard at veterans’ funerals and other memorial ceremonies.

Naturally, Hall has a flag pole in his yard. He flies both a U.S. and Texas flag on it daily, and brings out his POW/MIA flag on Memorial Day.

“When I got out of the military and came back to Orange and put up my flag pole, my respect for the flag went up. I fought for that flag.”

‘Neath the Red, White and Blue

Hall and the veterans groups he belongs to continue to fight for the Stars and Stripes.

Along with the Flag Resolution by the Second Continental Congress in 1777 making what’s said to be Betsy Ross’ creation official, the United States also has a Flag Code and Flag Etiquette.

The vets do their best to educate the public.

Outdoor flags should only be flown from sunrise to sunset unless the flag is illuminated for display 24 hours per day. The Flag Code says the flag should not be displayed in inclement weather “except when an all-weather flag is displayed.”

As a general rule, a flag should be replaced every six months to a year.

“When flags are faded real bad, they need to come down,” Hall said. “Even if you don’t have a replacement, pull it down. “If it’s ripped up, retire it from service.

“But don’t throw it in the trash can. It needs to be retired in the official manner.” 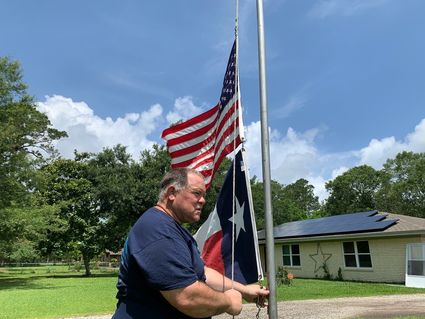 The approved method of disposing of unserviceable flags has long been that they be destroyed by burning, but the U.S. flag is considered such a sacred symbol that burning it an undignified manner is considered desecration.

“The Scouts and veterans groups will cremate the flags in special ceremonies on July Fourth, Memorial Day or Veterans Day,” Hall said. “At the VFW, we’ve had to use a lowboy trailer to carry all the boxes of Texas and American flags that people bring to us to be destroyed.”

Should auld acquaintance be forgot,

Keep your eye on the grand old flag.

Flag Day is not a federal holiday and only Pennsylvania celebrates it as a state holiday.

The italicized words above are from the song “You’re A Grand Old Flag” written by composer George M. Cohan in 1906.

Thanks Dave, for highlighting my son. He is a good man, with respect for his God and his country. I'm so very proud of him, and honored to be his mother.