Watermelons behind schedule, but prices and quality good 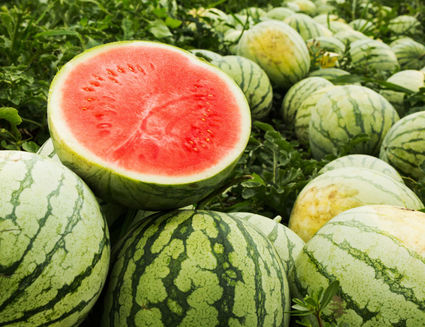 Watermelons in South Texas got a late start due to the winter storm in February, said Juan Anciso, Ph.D., AgriLife Extension horticulturist, Weslaco. Many fields under hoop tunnels experienced delays and required partial replanting due to the cold weather.

Rain has also presented delays and challenges during harvesting, he said. Fields were left muddy by 8-10 inches of rainfall, which has made harvest difficult. Trucks and trailers were stuck in fields and crews faced tough conditions, including heavy mosquito infestations. Additionally, hiring workers to harvest has been more difficult than in past seasons.

Anciso said the freeze helped reduce white fly populations, which in turn reduced the transmission of viral diseases. The wet weather caused concerns about fungal diseases, but farmers have been vigilant about spray applications to keep disease infestations down.

The rains, however, have not affected melon quality, Anciso said. Brix counts, the measurement for sweetness have remained at 10-plus. Brix counts of 10 are standard sweetness, while 11 and above indicate exceptionally sweet. Watermelon color both inside and outside were also meeting market standards.

Heavy rains at the wrong time can waterlog melons, which thins their Brix count and the redness of the fruit and causes their outer layer to turn white, Anciso said.

“This year was a challenge early with the freeze and late because of the rain,” he said. “But it looks like quality is still good and prices were pretty good.”

Watermelons: This year vs. last year

Last year, Florida had difficultly with their crop at harvest because COVID-19 impacted their seasonal harvesting crews, Anciso said. The subsequent shortage of melons coming out of Florida made demand and prices for Texas watermelons climb.

Prices are still markedly better than they were in 2019 when watermelons were at 14-16 cents per pound wholesale and producers were losing $1,000 per acre planted on average, he said.

“The prices are still good, they’re just not as high as they were getting, and all the difficulties between the freeze and pulling out equipment and having trouble finding harvesting crews make margins a little thinner,” he said. “It’s been quite the headache to get them harvested this year, but given how difficult it’s been, hopefully producers can turn a profit.”

Larry Stein, Ph.D., AgriLife Extension horticulturist, Uvalde, said growing conditions have been similar to those in South Texas and have created similar delays.

The cooler, rainy weather since late April could mean delays in watermelon fields typically scheduled to meet the Fourth of July market demand window. Vines in the Winter Garden region are starting to bloom, and beehives are onsite to pollinate.

Female watermelon flowers typically need 15 visits by bees to deliver enough pollen for proper fruit set, Stein said. The process from bloom to vine-ripe fruit being ready for harvest typically takes 30 days, which means the timing could be tighter than producers prefer.

“It will be good for producers who sell from a fruit stand or let people pick their own,” he said. “But producers typically want them coming off the vine a week to 10 days before the holiday weekend to meet the wholesale orders and get them to grocers in time. But plants are about seven to 10 days behind schedule right now.”