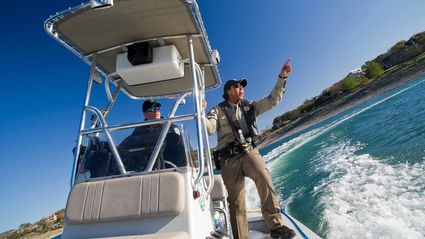 “The increase in boating safety incidents over the Memorial Day weekend is attributed in part to many variables including the increase in new boaters since the start of the pandemic in 2020, severe weather, lack of use of life vests, abuse of alcohol, and not following general rules of safe boating,” said Cody Jones, Assistant Commander of Marine Enforcement for the Texas Parks and Wildlife Department (TPWD). “Flooding, heavy rains, storms, high winds and tornados in parts of Texas — coupled with the higher-than-usual anticipated holiday-seekers on the waterways and elsewhere — kept Texas Game Wardens on heightened alert.”

Game wardens conducted safety checks on more than 11,283 vessels state-wide between Friday and Monday and issued 1,283 citations. Wardens also issued 1,639 warnings for various boating safety law violations, arrested 36 individuals for Boating While Intoxicated and filed another five charges for Driving While Intoxicated. Additionally, another 42 people were arrested for various other crimes.

“Drownings and deaths on the water are never easy to deal with, and arguably one of the toughest, least desirable parts of the job, since we’d like to see everyone return home safely…we know, though, that it’s even more challenging for the families who’ve unexpectedly lost their loved ones,” said Jones.

Over the weekend, game wardens were involved with medical emergencies on the water, sinking vessels, jet ski incidents, and boater/water rescues — among others. Due to heavy rains, flooding posed some issues throughout the state. Two kayakers without personal floatation devices (PFD) were stranded in the flooded Sabine River currents were rescued and returned to safety in Longview area. Game wardens made another water rescue on the Sabine river and rescued two adults and a two-year old baby as a result of an overturned kayak on Lake Livingston.

On more than one occasion, game wardens also were involved in search and rescue activities, responding to boating accidents, and engaging in kayak rescues in which PFDs were not being worn.