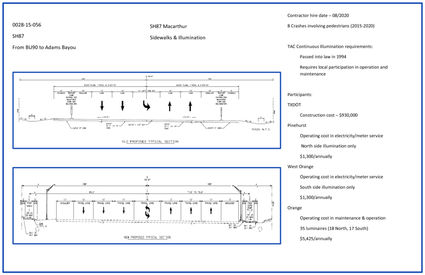 City council members at both Pinehurst and West Orange have liked what they’ve seen from proposals to place streetlights on MacArthur Drive.

“It was a real brief presentation, and we will talk more, but based on what I saw, it’s going to be a big addition to our city, because it’s aimed at keeping our citizens safe,” Johnny Asevedo, Pinehurst councilman, said.

“We’ve needed lights out there for quite a few years,” Shirley Bonnin of the West Orange council said. “It is dark and you don’t see people walking.

“I think it’s great that they finally agreed to put lights up there.”

In the past week, Kenneth Wiemer of TxDOT presented to both Pinehurst and West Orange councils a new proposal to place 35 new streetlights, 17 on the Pinehurst side and 18 on the West Orange side, along the nine-lane wide State Highway 87, also known as MacArthur Drive.

The nine lanes include three each for east and west traffic, plus a center turn lane and two paved shoulders.

MacArthur is the dividing line between Pinehurst to the north and West Orange to the south and the roadway itself was annexed many years ago by the City of Orange.

It’s been the site of eight fatal crashes involving autos and pedestrians between 2015-2020, according to Wiemer.

“And most of those were at night,” he added.

As proposed, TxDOT would pay $930,000 in construction costs that would putting up the lights and adding sidewalks along each side of the existing roadway.

Pinehurst and West Orange would pay the cost for electricity and meter service on each of their sides, which TxDOT estimates put at $1,300 per year.

The City of Orange would pay for maintaining the streetlights, which TxDOT estimates at $5,425 annually.

About a year ago, former Orange councilman Pat Pullen held a news conference to protest TxDOT’s then-announced plans to narrow the roadway to two lanes each way with a turn lane in the middle in order to add hike/bike lanes on either sides.

Any lighting would have to come in a later project, TxDOT said at the time.

“They wanted to take out a lane of traffic and put a wall up and have a bike lane,” Pullen said last week. “But you knew that wasn’t going to fix the problem. Most accidents are crossing traffic accident situations.”

TxDOT has not shared its proposal with Orange’s city council yet and nothing has been finalized by Pinehurst or West Orange, either.

But it’s been received well so far.

“It’s never been about us, [the cities of Orange or] Pinehurst or West Orange. It’s about the citizens and the life of human beings. You should be able to do whatever it takes.”

Pullen said he spent his six years on council pushing for lighting on MacArthur.

“We just didn’t make much headway,” he said. “But with this new director at TxDOT [District Engineer Chad Bohne], we felt like things might come around.”

Wiemer said the agency put their plans up for public comment and responded.

“We worked with all the city managers at Orange, Pinehurst and West Orange. We all heard the citizens’ concerns, when we went back and realigned the project so that it’s what the people wanted,” Wiemer said.