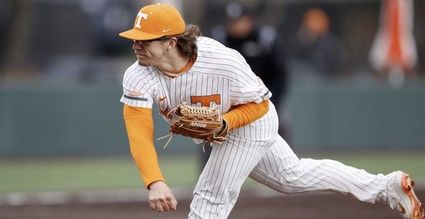 A great performer is one who can step on any sized stage and have a successful show (or game in this instance). Orange native Chad Dallas has had that kind of success throughout his young career as a baseball player.

He began to be noticed while a member of the West Orange-Stark Mustangs baseball program where he was a catcher as well as a good pitcher. Chad would often catch his older brother Jack when he was on the mound for the Mustangs.

Jack graduated and earned a football/baseball scholarship to Lamar University in Beaumont while Chad was pitching well enough to be named second team All-State by the Texas Sports Writers Association in 2017, three-time All-District selection for the Mustangs and Orange County’s Most Valuable Player as a senior in 2018 for allowing only four earned runs for the entire season and also batting .410.

On the next level, Chad played for Panola College where his dad Tony also pitched and went both years without suffering a mound defeat.

Chad was recruited by Head Coach Tony Vitello of the Tennessee Volunteers to the Division I level in Knoxville where he became the Friday Night Pitcher (No. 1 on the staff) early in the 2021 season. Vitello played his college baseball at the University of Missouri.

And again, Chad went through the first half of the season with an unblemished record. In fact, the only loss on his 11-1 record today came at the hands of Vanderbilt, the No. 2 team in the nation, when the Vols were shut out. And there’s not a pitcher in the universe who has ever won a game when his team scored zero runs.

Tennessee won the East Division of the Southeastern Conference and had a first-round bye in the post-season tournament. They lost 3-2 to Alabama on an umpire’s interference decision.

Chad took the mound the next day against Mississippi State and had his 12th quality start in 14 outings, leaving after six innings with the Vols leading 5-2. His teammates must have felt the frustration of the hosing they received from the umps the day before and exploded for seven more runs, winning by the 10-run rule 12-2 as Chad earned Victory No. 10.

After whipping Alabama 12-0 and moving Chad up to the next level of his college career in the NCAA Regional Tournament, Tennessee met a scrappy Wright State team in the first round. Chad gave up the second home run in as many innings and was replaced in the fifth inning with his team still leading 5-4.

But the bullpen failed for one of the few times and the Vols found themselves behind 8-5 in the bottom of the ninth inning, but had the bases loaded. Drew Gilbert became the man of the hour by launching a walk-off grand slam, giving the Vols a 9-8 victory.

Tennessee beat Liberty twice, 9-3 and then 3-1 in the regional final to advance to Chad’s next plateau--the Super Regionals--to meet LSU who had captured their regional by winning four straight elimination games.

As expected, Chad drew the opening assignment against the Bayou Bengals who are coached by Paul Mainieri, the active career wins leader with 1,505 victories, who announced before the tournament that he will retire after this season.

This new level of competition didn’t phase the Orange native as he got LSU out in order in the first inning with seven pitches.

The second inning was a different as Chad was forced to pitch in a pouring rain shower and left a fast ball up that was hammered for a home run before time was called after a bolt of lightning flashed.

I don’t know how Chad stayed loose during the delay that lasted nearly an hour, but he came back still throwing what turned out to be his best performance of the season. He was hitting his spots and fooling the hitters with his repertoire of fast balls, sliders and cutters.

However, when his pitch count neared 100 after the sixth inning, Vitello took Chad out after giving up just the homer and an unearned run, but still was behind 2-1. He had a career-high 12 strikeouts in six innings.

Tennessee has come from behind in nearly half of their 50 wins this season and did it again, scoring a pair of runs in the bottom of the sixth and went on to win 4-2, giving Chad his 11th victory.

Sunday’s game wasn’t nearly as close as the Vols pounded a season-high six homers and beat LSU handily 15-6 to advance to the ultimate level for college baseball players—the College World Series in Omaha, Neb. this week.

This will be Tennessee’s fifth trip to the CWS and the Vols first since 2005 after setting program records for runs scored in a Super Regional game and home runs (6) in an NCAA Tournament game.

The Vols will play the Virginia Cavaliers in the first round of the double-elimination College World Series 1 pm Sunday with their ace Chad Dallas gunning for his 12th mound victory of the season.

I’m hoping that Chad Dallas betters his last performance Sunday and gets a shot at the pinnacle level for a baseball player—and sooner rather than later!!!

KWICKIES…The Texas Longhorns needed a walk-off double from outfielder Eric Kennedy in the bottom of the ninth inning Saturday to edge past the University of South Florida 4-3 Saturday and then whipped USF on Sunday to earn a berth in the College World Series in Omaha. The visiting Bulls trailed 3-0 going into the ninth inning Saturday and rallied with a home run, double and pinch-hit two-run homer with two out and two strikes on the hitter to tie the game at 3-3.

It’s amazing that the Arkansas Razorbacks, who held the No. 1 spot in the nation’s collegiate baseball poll for most of the season, fell flat in the Super Regionals after winning Friday’s opener over North Carolina State 21-2. The Wolfpack came back with a vengeance and held the Hogs to four hits Saturday in a 6-5 win and three pitchers limited Arkansas to four hits again to win 3-2 and punch their ticket to the CWS. The Razorbacks were the fifth national No. 1 seed to be eliminated in the Super Regionals.

The Philadelphia Phillies’ sweep of the New York Yankees last weekend marked only the second time that has happened in Phillies’ franchise history. The only other time was in 1997. Yankee manager Aaron Boone said the team needs to “step it up and find out what we’re made of” after losing seven of their last nine games.

JUST BETWEEN US…Although the Houston Astros still trail the Oakland A’s by a couple of games in the AL West Division standings, they concluded their last road trip with a bang, pounding out 20 hits and crushing the Minnesota Twins 14-3 Sunday. The Astros won six times on this nine-game road trip against three teams that should make the post-season playoffs—Boston, Toronto and Minnesota—and won all three series along the way. Hitting and starting pitching don’t seem to be Houston’s problem, and if there is a glitch it has to be in the bull pen. Sunday’s game at Minnesota marked the sixth time this season that the Astros scored 10 or more runs this season with four starters batting .300 or better.