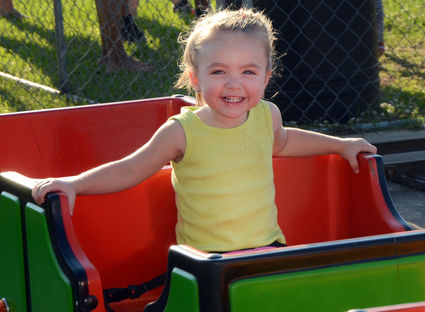 A child enjoys one of the many rides on the grounds of the Lion's Club Carnival in Orange during opening week of the 2021 event.

It was kinda like getting back on the bike.

There were a hitch or two observed in the first week of the first non-delayed Lions Club Charity Carnival in a handful of years but that didn't spoil the fun.

"Everybody out there was pleased," event co-chairman Pam Honeycutt said of opening week June 16-19.

The three-weekend event continues Wednesday through Saturday for the next two weeks at Lions Den Park at the intersection of MacArthur Drive and Adams Bayou, near downtown.

Admission is $3 for adults, $2 for students aged 10-17 and youngsters under 10 are admitted free. Most rides are a buck and there's food and games aplenty.

Proceeds of the carnival will be used by the Lions Club to fund club causes like the Eyeglass Bank, scholarships for youngsters to Lions Club Camp, food baskets, their beautification tree project and the Texas Ramp Project.

"We did get one good shower Friday night, but people are interested in coming out to the Carnival, and we were glad to see them."

This is the 80th Orange Lions Carnival, and until last year's COVID-19 wipeout, the event had been put on every year since the end of World War II.

Most of those were held in the fall, but the area's recent history of Gulf storms has caused a few carnivals to be shuffled all over the calendar.

A June carnival, trying to beat storm systems that have lately been the worst in August and September, came out of the box too hot, Honeycutt admitted.

"Usually it's a little cooler than it is now," she said of recent temperatures in the 90s. "We expected it to be hot, but we'll definitely look at changing the dates again."

A new ride, the Kiddie Scrambler, saw non-stop action," she said, "and the Thunderbolt had a huge line. All the kids wanted to ride the Thunderbolt."

This carnival is unlike most in that the rides are owned and operated by the sponsors, not a third-party business. But sitting in a warehouse unused for two years isn't ideal. 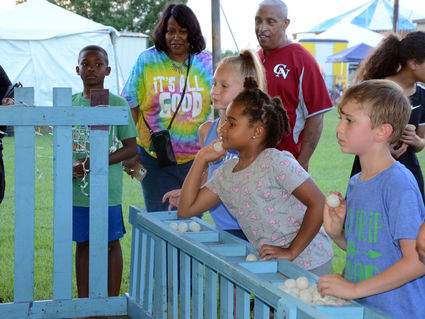 Children play for prizes at one of the many game stops at the Lions Club Carnival that  starts up again on Wednesday.

Two of the perennial favorites of Orange Carnivals, the Tilt-A-Whirl and Ferris Wheel, are out of action this year, and Honeycutt reports the Thunderbolt had some opening week problems. Parts for the Merry-Go-Round are expected to arrive in time for a weekend fix.

"We got a new wiffle ball game this year, and it's been a big success," Honeycutt said.

"The hamburgers are still really good. Steve Maddox is doing a super job there, and Capt. Chris Horner is perfecting his pork-a-bob recipe.

"We have pulled pork nachos at the cotton candy booth this year. Those are real good and really popular. People enjoy them."

As for last weekend's shakedown, Honeycutt said, "You do have some problems you can't forsee. But we're about to get the bumps hammered out.

"We're out there to help the community, and if people will help us [by attending] we'll put that money back into Orange County real soon."