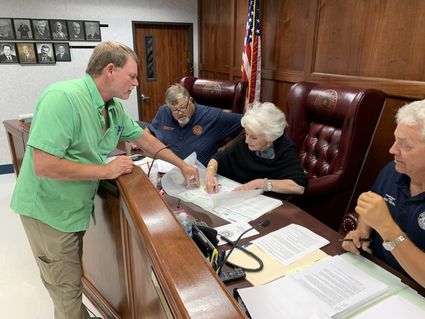 County Treasurer Christy Khoury banked $516,000 in sales tax receipts for the county from the month of April.

That ½ of a cent sales and use tax rebate from the state of Texas is 7% higher than the figure from a year ago.

According to the state comptroller’s website, Orange County is 15.7% ahead of sales tax receipts from last year at this time.

“Despite the pandemic, the entire state’s sales tax is the highest in recorded history,” County Judge John Gothia said.

Good news continued for commissioners as County Tax Collector Karen Fisher announced May collections of $369,500 for the county government till. The 2020 tax collection has reached a 95.25% rate, she said.

Jennifer Haney, who has been asked to head up the county’s formation of a health department, reported that she had landed a $1 million grant to to build its public health workforce.

And among the green day, Mosquito Control Director Patrick Beebe was finally granted permission to spend $25,000 for a new truck.

The old one had 200,000 miles on it and its replacement was included in the 2021 fiscal year budget, which began last October.

But Beebe agreed to put off receipt until the New Year, then put off again, because of Hurricane Laura expenses.

“We appreciate everybody buying a little more this year, so we can get extra sales tax money,” Gothia joked.

The county paid $438,000 in weekly bills, with $126,000 going as a quarterly payment to help fund Orange County Appraisal District.

Orlando Espinoza of The Association of Counties commended the county for its new wellness programs and generally better health.

He said while claims were down for the county, it was still going to get a 4.5% rate hike this year, because the other counties in the insurance pool had turned in more claims.

COVID-19 deserved a lot of blame for higher payouts across the state by the insurer, Espinoza said.

City Council for the City of Orange unanimously backed a proposal by its Economic Development Corporation Tuesday night that should lead to a quick start on a medical center to serve Orange County.

The city accepted another land donation from the Houseman Companies, then rubber-stamped the EDC agreement to spend another $340,000 to build a roadway to the project.

The Gisela Houseman Medical Center at Eagle Point, a long-in-the-planning development near the intersection of Interstate 10 and Route 62, was announced in 2019, when Houseman Companies donated 20 acres of land upon which a medical realty group planned to end the town’s curiosity of being the largest county in Texas without a hospital.

But those plans were sent to the backburner just months later by Tropical Storm Imelda, and delayed by later storms and the coronavirus pandemic shutdowns in March of 2020.

The city had pledged money to help build a four-lane Eagle Point Parkway to bisect the property east to west, but had to delay some of those plans when bids for roadbuilding far overshot the budget.

The $340,000 in additional funds approved Tuesday will add enough to the budget to construct a north-south entry from the I-10 feeder road to the planned medical center on the west side of the property.

Developers maintain long-term hopes to build out all the way to 62.

The Houseman Companies donated almost five more acres of land to the project Tuesday to make room for that access road.

Among other action by the council Tuesday, members received a presentation by the Texas Department of Transportation on a nearly $1 million proposal to add 35 streetlights on MacArthur Drive, which extends from the site of the old traffic circle to Adams Bayou.

While no council has officially accepted the proposal, West Orange and Pinehurst council members seemed happy with a deal that has them paying for the electricity to power the lights while Orange would pay for the upkeep of the streetlights and TxDOT would foot the construction costs.