Mooney restocks SO with seizure funds 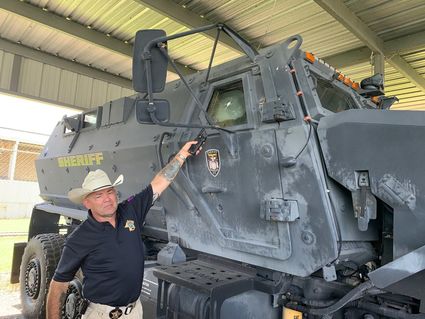 Sheriff Lane Mooney points where bullet-proof glass saved the life of Newton County Sheriff Billy Rowles while riding in the Orange County SWAT vehicle during a day-long shootout in Gist last year. Mooney has ordered a second armored SWAT vehicle to be paid for with Treasury Forfeiture funds.

The Orange County Sheriff's Office has spent almost $2 million in asset forfeiture funds in the past year to better equip its 150 employees.

"That was with seized funds at no cost to the citizens of Orange County," said Captain Chris Frederick, a former partner of Mooney at the Vidor Police Department.

"That's all compliments of your drug dealers. Thank you," said Mooney, who hired Frederick to head up the OCSO's Patrol Division.

Merritt did not run for re-election in 2020 and Mooney won a down-to-the-wire primary election over Rob Strause, who like Mooney had been both a sheriff deputy and elected constable. Since Mooney had no November opponent, Merritt turned over the keys six months early and retired at the end of June 2020.

"When I ran for Sheriff, one of my deals was, I'm going to spend seized funds on my guys," Mooney said in a recent interview. "I'm going to make sure that they have the best equipment available that we can afford.

"That way they can get to a person that needs help. Also, the best equipment we can give them to get home."

At twice-monthly Commissioners Court meetings, County Judge John Gothia and each of the four County Commissioners have regularly lauded Mooney or his Chief Deputy, Keith Reneau, for saving money from the county budget by spending the seizure funds.

The new Sheriff hasn't been bashful about that.

Frederick and Mooney both recalled times in their careers when they either couldn't answer calls, or chase down suspects because of auto malfunctions or their cars' lack of speed.

After high water from 2017's Hurricane Harvey and other recent floods convinced area law enforcement to ditch the low-to-the-ground Dodge Chargers as patrol cars, Merritt led the OSCO shift to SUVs like the Chevy Tahoe or Ford Explorer.

But tight county budgets brought on by recent storms limited Merritt's administration to purchasing about 10 vehicles per year.

Without the added help of asset forfeiture funds, Orange County already spends at least a third of its $40 million annual budget on law enforcement, paying and providing for the OCSO employees and the county jail they are required to operate.

By spending the asset forfeiture funds, Mooney has completed that switchover to the SUVs and even has a half-dozen Chargers stored away on a back lot as backup cars, Frederick pointed out.

The Sheriff's Office operated short-handed during the final years of Merritt's third four-year term. Retirements of older deputies who had served Orange County for 20 or 30 years created the openings, some of which Merritt chose not to fill, preferring to "consolidate some jobs."

Mooney says he has fully staffed the department for the first time since at least 2015, when he was a deputy here.

"I hired 14 people in three days," he said. "People wanted to come to work here."

"A lot of young people are anxious to work," Frederick said."

"When we came in, we completely revamped the SWAT team and Narcotics Division. We overhauled it all," Mooney said.

"Chris is a longtime street cop. I trust him with everything I have. He's done an excellent job of staffing Patrol Division."

Frederick said the OCSO now has radars in all its patrol cars, plus gun racks that lock away deputies' rifles in each car.

Each patrol officer has night vision gear, though it's not clear if it was purchased with forfeiture funds because the expenditures noted in open meetings are not required to be specific – often not required to be made public at all.

The OSCO receives hundreds of thousands of dollars of government grants from federal and state agencies each year.

In Mooney's restructuring, he's preparing to unveil a Marine Division that will patrol area rivers and streams to promote boating safety and offer better security for waterfront property.

The K-9 unit had been inactive and now the two trained dogs are being used to alert for drugs and contraband during traffic stops and assist in tracking suspects.

In recent months, the OCSO has received public thanks from the Texas Department for Public Safety and Linebarger tax collection agency during Commissioners Court meetings.

DPS said the OCSO's drone had aided State Troopers at accident scenes and last year's train derailment, convincing DPS to start a drone unit of its own. Linebarger said delinquent property tax collections were up after OSCO assigned staff to remind deadbeats to pay up.

Mooney and Frederick were both K-9 officers with the Vidor PD, working up and down Interstate 10 to seek out those transporting illegal drugs.

"I-10 is the drug trafficking corridor to the East Coast," Mooney said. "It comes right through here every day. Just the other day, our interdiction officer found $139,000 in a hidden compartment at 10 a.m. in the morning."

Mooney said while working in Vidor he once found $720,000 in drug money in a car's hidden compartment.

Large amounts of cash or quantities of drugs found in hidden compartments mean a quick call to federal authorities.

"As soon as we find something like that, we call the Feds and they come right out and they take over the money," Mooney said. "That way, there's no issue with that. We keep a video camera rolling until they get here."

After resolution of the case, the Treasury will send most of the money back to the department which made the stop but it can only be used for certain law-enforcement purchases. 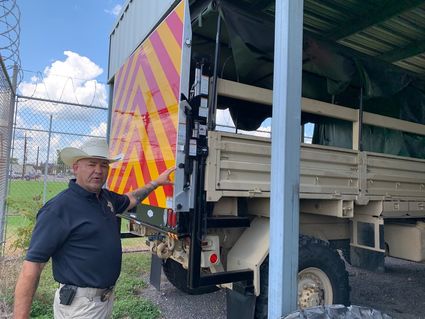 Orange County Sheriff Lane Mooney shows off the hydraulic lift on the back of a 1078 surplus military truck donated by the government to assist in high-water rescues like those needed during Hurricane Harvey in 2017. The county has four 1078s, which were prestaged before Tropical Storm Claudette earlier this month, two being stationed in Vidor, two in north Orange. Fortunately, the storm missed Southeast Texas.

There is some controversy over asset forfeiture arising from the fact that often the vehicle driver is not charged with a crime but law enforcement keeps their money.

"We check them for warrants. We go through Interpol. We check them all around," Mooney said. "A lot of times, you don't file charges on them."

That's because it cannot be proven they own the vehicle or knew what was hidden inside.

"What they do is they'll take a third-person ownership on a vehicle," the Sheriff side. "'Hey, I just borrowed this car to go from Point A to Point B.' And if he gets stopped in between, all he's got to say is, 'It's not my car. I didn't know what was in there.'"

According to county budgets posted online, Mooney inherited about $1.6 million in Treasury Forfeiture Budget when he became Sheriff and had more than $1 million remaining at the end of April, 2021.

"I hope by the time we need funds, the county can come through for us," Mooney joked.

He joked because he isn't expecting drug trafficking to go away anytime soon.

"It's basically a numbers game," he said. "The more you stop, the better chance you have of catching somebody."