Big Day for Viator and Reeves 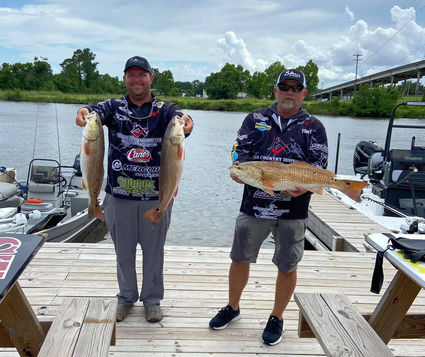 Jeremy Reeves and Tony Viator put together a solid bag Saturday and was just enough for the win in the Sabine Redfish Series Event #3. This win puts them atop the field for Team of the Year points heading into event #4 next month, which is $15k top prize!

Tony Viator and Jeremy Reeves squeezed the most out of a very tough fishing day and won everything there was to win in last weekend's third qualifying event in the Sabine Redfish Series.

The east Texas Safe Floor team won first place money with a 20.96-lb. stringer, the big fish side pot with a 9.26-lb. red and the most spots side pot with nine. The fact that only ten of the twenty-one teams managed to weigh in fish was a testament to the difficulty of the day. All of these guys can fish!

Easily more important to Viator and Reeves than taking home most of the money was the fact that they also took over first place in the Angler of the Year Standings which is worth a tidy $15,000. The first place team going into the day struggled, but only dropped to third place and are still in the hunt for the big payday.

Team Bertrand claimed second place money Saturday with 18.90-pounds barely nudging out Mason Arnoud's and Jeff Simmon's 18.85 lb. catch. Reeves and Viator will hit the water with a six pound lead the final day. Chasing that kind of lead with only a three fish limit, the two closest teams will not only have to have a big day, but hope for a hiccup by the leaders as well.

Anything from fickle fish to motor problems can derail a team, but Viator and Reeves have been very consistent with a 21-lb. average through the first three events. All questions will be answered at the

final weigh-in at High Tides restaurant in Bridge City on July 31st and one team will drive away $15,000 richer!

Chances are good that the teams fishing Tuesday's Sabine River Shootout were forced to again wear rain gear. With the exception of the last tournament, they have drawn some really nasty weather days.

A brief window of no precipitation greeted the teams last week and Dustin Leger and Cody Reber earned first place money with a solid 10.43-pound catch. Reese and Mike Soliz anchored their second place stringer with a 4.45-pound bass that earned them big bass money as well.

A slightly smaller field of sixteen teams fished the shootout, but ten of them returned with limits. Two bass over the four pound mark were weighed in.

The lake level dropped a little last week on Toledo Bend and Justin Roblais and Kent Lyons apparently found it to their liking. The two anglers stowed away their crappie gear for a couple of days and did a number on the bass. According to Kent, they were fishing shallow water with a buzz bait and chartreuse frog trailer at night.

Not only did they catch good numbers, but Justin caught and released a bass over seven pounds both Friday and Saturday night. The two teenagers live only one long cast from the lake and they get in their licks virtually every day.

"Neither of us play any sports so we have lots of time to fish," said Kent. "We prefer to bass fish, but our parents love crappie so we fish for them more than we really like."

"We know a lot about upper Toledo Bend because we fish a lot, but we have learned more watching the pros fish tournaments here than actually fishing," added Justin. "Neither of us has ever caught a double-digit bass, but our day or night is coming!"

So, what do you do when you hit Sabine Lake on a perfect weather day and there isn't a single tern or gull pointing the way to a decent bite on redfish or trout? Chuck Uzzle and I experienced one of those mornings last week and fortunately, Chuck decided to just get on the shoreline and grind a little while prior to calling it a day.

It didn't take long to discover that there was a decent flounder bite taking place in the flooded grass.We only caught and missed a few, but it was good enough to merit a shot two days later. 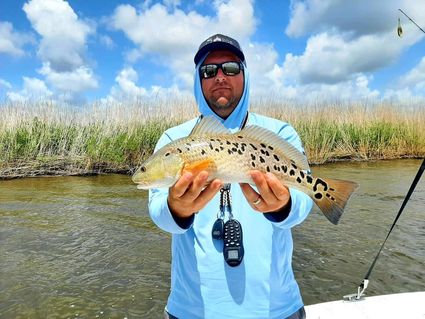 We never even looked for gulls, but headed directly to the shoreline. A thunderstorm drove us back after only a few hours of fishing, but not before we had boxed two limits of flounder and missed at least that many more.

The fact that we just picked the first shoreline with tall Roseau to fish was equally encouraging.The catching was split between a pink Gulp Curly tail and a three-inch Usual Suspect Swim Bait. We also fooled several redfish as well, but not one of them was a keeper!