Vid Chronicles channel to hit one million subscribers this month 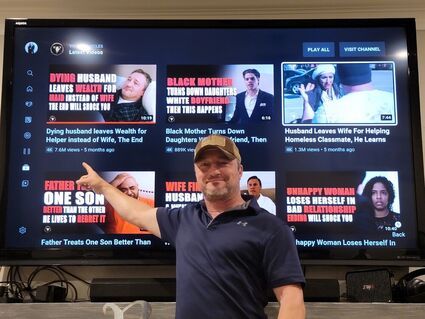 John Frederick shows off his most popular video on the Vid Chronicles YouTube channel that has reached 7.6 million views so far. Frederick has filmed 60 videos for the channel since December, 16 of which have already reached over a million views each.

When John Frederick filmed his first "skit" for Vid Chronicles, a YouTube channel, no one knew it was going to make the progress it has.

Frederick, a Mauriceville actor, was in the background of 2018 Oscar winning Best Film "The Green Book" and had a supporting role in Tom Hanks' 2020 film "Greyhound." He has also had leading and supporting roles in several shorts produced locally. He also cohosts "The Barefoot Director" on Facebook.

He was doing a friend a favor in December when he first met Romario Facey, the creator of Vid Chronicles.

Frederick said someone he knew came to him and said, "Hey there's this guy doing YouTube videos in Dallas and I'm supposed to do one, but I got booked for something else, so I'm not going to do it. Do you want to fill in for me?"

Frederick said, "Maybe, what's it about?"

The friend sent a headshot of Frederick to Facey. Facey agreed he would fit the role, so John headed to Dallas.

"He really liked my performance and said, 'Hey man, next month we're going to start shooting 30 skits over 10 or 11 days and upload one a day.'"

The next month he was in five or six skits. "Then it went up to six or seven. I do 12 to 15 a month now," said Frederick. He has kept a spreadsheet of all the ones he has done, which now totals around 60.

"You can see the growth."

When John started, the channel was about a year old and had around 100,000 subscribers. By the end of July, it should reach over one million subscribers.

Their total at press time was 911K.

"We're going to have a big celebration party," said Facey.

"...and at some point, this year we're going to do a Vid Chronicles movie," piped in Frederick.

"That one, we'll put through a theater or something," said Facey.

Facey did not expect this kind of success. When he started the channel, it was to help actors get practice and training. They were only doing maybe one video a month to start in December of 2019. A few months later, COVID-19 shut everything down, including most film productions. That meant there were more out of work actors looking for things to do.

It wasn't until YouTube came to them about monetizing the channel that they started to really work to grow it.

Facey admits the quality of the early skits were lacking, but as the skits earn more money, he is upgrading crew and equipment.

They focus on short skits, most under 10 minutes, that are socially relevant, bringing positive outcomes to negative situations, hopefully doing their part to make the world a better place.

They are just gaining a bit of fame in the process.

Frederick now has fans worldwide. He was communicating with one in Australia, Saturday.

Recently someone told Frederick he needed to work his Instagram account. He laughed saying he hardly used it and had 10 followers, all family. He recently took their advice and started posting some VID Chronicles "behind the scenes" photos. He has already jumped to over 200 followers. As others start to find it, no doubt there will soon be a "k" behind that number. His Instagram handle is johnroyjr21 if you want to join the throng. You can also check out his filmography on IMDb at https://www.imdb.me/johnroyjr.