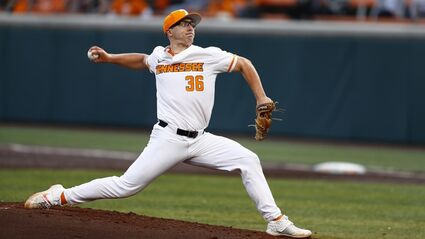 Number 121 hit the jackpot in the 4th round of the MLB Draft Monday afternoon as former West Orange Stark and University of Tennessee mound ace Chad Dallas was selected by the Toronto Blue Jays. Whether the husky right-hander signs a contract or returns to Vols for his senior year remains unknown at this writing.

Last month the big news about last night's All-Star Game was that the Houston Astros had seven players nominated, which led the major league teams.

After the ballots were compiled a couple of weeks ago, four Astros players were selected for the American League All-Star roster-the entire Astros' infield with Alex Bregman at third, Jose Altuve at second, Yuli Gurriel at first and Carlos Correa at shortstop.

Then the players voted for the game's eight starting position players and NOT ONE member of the Astros was chosen as a starter for last night's classic, not even five-time All-Star outfielder Michael Brantley who was leading the major leagues in hitting at the time.

Brantley, Altuve, Correa and relief pitcher Ryan Pressly were all voted on the team as All-Star reserves. Altuve is leading the Astros with 20 home runs, Correa is rated as one of the best-if not the best-shortstops in the major leagues and Pressley has saved 16 games for Houston out of 17 save situations.

A week ago, Altuve announced he would not be playing in the All-Star Game and wants to rest his left leg, which was injured last month.

However, with the Astros playing 20 games in 20 days recently, Altuve insisted on playing through the injury. It must not have hurt him too badly Sunday when he walloped a walk-off three-run home run that helped turn a 7-2 ninth-inning deficit to an exciting 8-7 come-from behind victory over the mighty New York Yankees.

On the same day, Correa announced that he needed the All-Star break to be with his wife Daniella, pregnant with their first child, to stock a nursery and the break will give him his first extended chance to bond.

Altuve and Correa jointly decided that there is no reason to play in an exhibition game and be booed heavily by the fans at Coors Field in Denver who will never forget the Garbage Can Lid Scandal of 2017.

On Saturday, Brantley and Pressly also pulled out of the All-Star Game, leaving the classic with no Houston representation in this year's classic. Major League Baseball could add an Astros' representative to the American League team, but none of the 10 replacement players announced Saturday play in Houston.

Brantley has been nursing a sore right side and withdrew from the game stating, "It's the right decision for me and my family and this organization." He missed two games in the recent Cleveland series but was not on the American League's Injured List.

Pressly will skip the All-Star Game to be with his wife, Katherine, who is expecting the couple's first child later this month. According to the major league's Collective Bargaining Agreement, players who would justify placement on the paternity list are not mandated to participate in the All-Star Game.

The CBA requires certification from a club physician and medical records to verify the circumstances of why the selected players will miss the game.

"I support my players," Astros' manager Dusty Baker told the Houston Chronicle reporter Saturday. "They're not jiving as to the reason why they are not going. It's been a tough road here where none of these guys are injured-they're hurt but still able to play-but they're not 100 percent."

Now that it no longer determines home-field advantage in the World Series, the All-Star Game affords almost no incentive for attendance.

"The Midsummer Classic isn't what it used to be. The sports world doesn't come to a halt for the All-Star Game like it once did," Friday's Houston Chronicle stated. "Interleague play has erased much of the mystery between the American and National leagues, And, perhaps more importantly, star baseball players aren't the big stars they used to be."

When Dusty Baker made the All-Star Game in 1982, ABC drew a 25 share and more than 34 million viewers. The 2019 game posted a 5.0 share with just 8 million viewers in less than 6 million households.

I really believe the Astros players named to the 2021 All-Star Game are retaliating against the American League players who voted them as reserves and are letting them see if they can win last night's game without major league's highest batting average and fewest strikeouts on the roster.

KWICKIES...Former West Orange-Stark and Alabama standout Deionte Thompson is listed on the Arizona Cardinals 2021 projected depth chart as the back-up free safety. With the addition of former Houston Texans J.J. Watt and DeAndre Hopkins, the Cardinals could very well have a Super Bowl contender this season.

Saturday's 1-0 New York Yankees victory over our Astros was nothing more than one bad pitch by Zack Greinke to Aaron Judge, who provided the only scoring on a home run and a masterful mound job by former Astros' ace Gerrit Cole, who allowed only three harmless hits.

Golfer Phil Mickelson has vowed to never play in another Rocket Mortgage Classic tournament after a story in The Detroit News revealed he was cheated out of half-a-million dollars by a bookie according to a racketeering trial transcript that occurred back in 2007. The trial transcript didn't appear in court files until 2018.

A few familiar names popped up in Sunday night's Round one of the 2021 MLB draft. The closest to Southeast Texas was Sam Houston outfielder Colton Cowser, who was the fifth player chosen. The Southland Conference standout was taken No. 5 by the Baltimore Orioles. Also taken were right-handed Vanderbilt pitchers Jack Leiter (No. 2 by the Texas Rangers) and Kumer Rocker (No. 10 by the New York Mets).

Number 121 hit the jackpot in the 4th round of the MLB Draft Monday afternoon as former West Orange Stark and University of Tennessee mound ace Chad Dallas was selected by the Toronto Blue Jays. Whether the husky right-hander signs a contract or returns to Vols for his senior year remains unknown at this writing.

PGA Tour golfer Lucas Glover ended a 10-year drought by winning the John Deere Classic Sunday when he birdied five of the last seven holes. His most recent win was in 2011.

Team USA, favored by a whopping 27 ½ points, was upset by Nigeria 90-87 Sunday in the basketball exhibition opener. With a plethora of NBA standouts on its roster, Team USA will hopefully do better when the Olympics begin later this month in Japan.

JUST BETWEEN US...You wouldn't know the Houston Astros were the best hitting team in the major leagues if you just saw their last four games before the All-Star break. Thursday, they lost to Oakland 3-1 and mustered six hits, were blanked 4-0 by the Yankees Friday with four hits, were shut out by former Astros' ace Gerrit Cole 1-0 Saturday with three hits and were in the same boat on Sunday-losing 7-2 going into the bottom of the ninth inning with just three hits. But then they remembered that they were MLB's best hitting team and started the inning with a squibbler that nobody fielded, two doubles, a pinch-hit single by Jason Castro a fielder's choice and with the score 7-5, "injured" Jose Altuve slammed a walk-off, three-run home run giving Houston an exciting 8-7 comeback victory to take into the four-day All-Star break.