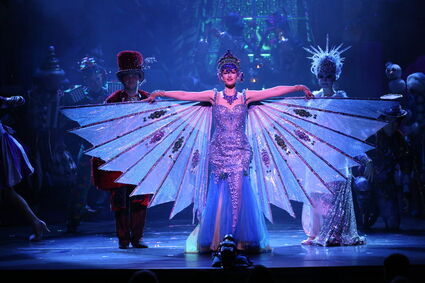 The Lutcher Theater for the Performing Arts 2021-2022 season ticket sales are ongoing. They announced spotlight packages of four or more shows are on sale now.

The new season kicks off in October with Asleep at the Wheel.

“It’s part of their 50th anniversary tour,” said Guillotte-Stark. It is a little later launch this year, October 16th.

“Performance art is coming back thankfully, but it’s coming back slowly. Broadway is moving towards a massive undertaking. Once everything shuts down it takes a minute to bring it back,” said Guillotte-Stark.

“Texas is getting back to normal,” she said. “But that’s not the same with each state. We think Orange is amazing, but it can’t support an entire tour.” It takes time to reschedule entire tours after being shut down for over a year.

Referring to the big touring companies, “We’re fortunate they are back on the road and touring again.” She said to the art of scheduling a season is “a ballet of sorts” that theater director Lynae Sanford is adept at dancing.

Normally they travel to New York to view some of the potential shows, but the last time was in January 2020 for the Arts conference just before the world shut down. Guillotte-Stark said they previewed one of the new shows this season, “An Officer and a Gentleman.”

When Broadway shut down, the cast quarantined together to keep things going and stay in practice, so they were one of the shows ready to hit the ground running when things opened back up.

“They rehearsed, they perfected their show and now…they are ready to go on tour, which is kind of amazing and brilliant that they did that.”

The production is based on the movie of the same name starring Richard Gere but has been made into a musical.

“They have some great iconic 80s music.”

Several other Broadway musicals are also slated for this year including “Fiddler on the Roof”, “Hairspray” and “South Pacific.”

“’Charlie and the Chocolate Factory’ is one we’re really excited about. It’s a great family show,” she said. “It’s got great colors and movement and some great songs from the movie.”

A Ladies Night Out show will be in May with “Waitress.” “It’s an all-female creative team, which is unique to the show.”

“If you came up in the 60s you recognize Carol King and all of her iconic music,” said Guillotte-Stark. “She wrote the music of a generation.”

Guillotte-Stark said “Beautiful”, and “Fiddler on the Roof” were part of the cancelled season last year and luckily, they were able to get them scheduled for this year. She expects them to be extremely popular and tickets sales to be brisk. She also expects the family shows to see a filled auditorium.

Titles of Lutcher Incredible Kids events will be released in August. They usually have four daytime shows for elementary and middle school field trips. “Macbeth” will be presented for High School students this year.

"There are so many fantastic shows in this season's lineup, buy now and get the benefits of being a season ticket holder, before tickets go on sale to the public," she encouraged.

Tickets vary by show, seat location, when you buy, etc. but on average, they range from $35 in the balcony for some music shows up to $85 in the Orchestra for some Broadway shows.

“There is not a bad seat in the Lutcher,” she said.

Asleep at the Wheel

With 10 Grammy® Awards, a Lifetime Achievement Award by the American Music Association, 31 albums and over 20 singles on the country charts, Asleep at the Wheel has sustained a thriving career and entertained fans for more than five decades.

Cirque Dreams Holidaze lights up the stage in a whimsical, Broadway-style musical infused with contemporary circus artistry into the ultimate holiday gift for the entire family.

“Hairspray,” Broadway’s Tony® Award-winning musical comedy phenomenon that inspired the blockbuster film and live television event, is back on tour.

With a staggering 12 Grammy® Awards, 20 Dove Awards, and 7 Stellar Awards, CeCe Winans is one of the most accomplished and celebrated female gospel artists of all time.

Fiddler on the Roof

Tony®-winning director Bartlett Sher brings his fresh take on a beloved masterpiece to life as Fiddler on The Roof begins a North American tour direct from Broadway. Featuring the Broadway classics “Tradition,” “If I Were a Rich Man,” “Sunrise, Sunset,” “Matchmaker, Matchmaker” and “To Life,” Fiddler on The Roof will introduce a new generation to this uplifting celebration that raises its cup to joy! To love! To life!

An Officer and A Gentleman

This new musical is a sweeping romance based on the Oscar®-winning film starring Richard Gere.

Charlie and the Chocolate Factory 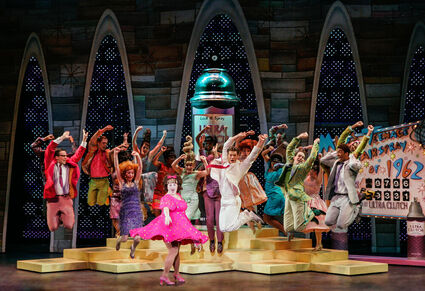 It's the perfect recipe for a delectable treat: songs from the original film, including "Pure Imagination," "The Candy Man," and "I've Got a Golden Ticket," alongside a toe-tapping and ear-tickling new score from the songwriters of Hairspray.

Waitress tells the story of Jenna, an expert pie maker who dreams of a way out of her small town, an uplifting celebration of friendship, motherhood, and the magic of a well-made pie.