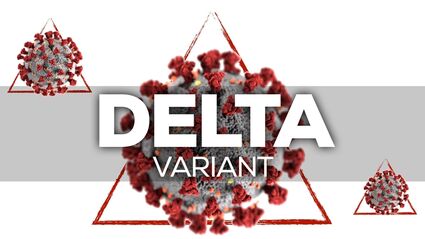 This week's report of new cases includes the first confirmed case of the Delta variant of the virus in the county.

A Vidor resident tested positive for the Delta variant of COVID-19, Sharon Whitley, the Hardin County Health Director whose office acts as a clearinghouse for health stats in both Hardin and Orange counties, confirmed on Tuesday.

No other identifying information (name, age or gender) was provided.

"What we've been told is that the Delta variant is very contagious," Whitley said. "And they do expect us to see more cases."

According to statistics posted on the Texas Department of State Health Services website, Orange County had reported 8,698 cases and 155 deaths from COVID-19 since its emergence in March of 2020.

At its peak locally, in mid-May 2020 and mid-January 2021, the seven-day average of new cases confirmed in Orange County was about 55 cases per day.

Currently, the county is reporting a seven-day average rate of 10 new cases per day.

The DSHS website shows 67 new cases in the county since July 4.

"This is an uptick from what it has been, but that's from all the gatherings from the July Fourth weekend," Ardoin said. "We kind of expected that."

The DSHS website showed the seven-day average going into July 4 was down to 2 new confirmed cases a day for Orange County.

The Center for Disease Control says Americans age 12 and older should get vaccinated for COVID-19.

Texas ranks 37th of 50 states when it comes to all citizens fully vaccinated (42.8 percent) and Orange County ranks 241st of the 254 Texas counties for percentage of fully vaccinated residents.

The DSHS website shows that only 28.5 percent of Orange County residents 12 and up have been fully vaccinated while 33.2 percent have received at least one dose of vaccine.

Statewide, 51.5 percent of Texans over 12 have been fully vaccinated, DSHS says.

"We have seen a decline in vaccinations," said Whitley, speaking both for the Hardin County Health Department in Kountze and the Orange County Expo Center in Orange.

This chart, courtesy the CDC, tracks the seven-day average for COVID-19 cases reported by Orange County, Texas, for 2021, through July 16. The numbers on the left reflect the week from July 10-16.

The Orange and Hardin county health officials are hardly the only places giving vaccines, as most commercial pharmacies also administer the COVID-19 vaccinations.

As far as new cases go, Whitley says it is the younger age brackets that have the most infections.

The government didn't offer vaccines to school-age young adults until all other age groups were offered the shots.

"We have seen the age groups shift, like they have across the nation," Whitley said. "We're seeing younger people, much younger people, testing positive for COVID-19 now."