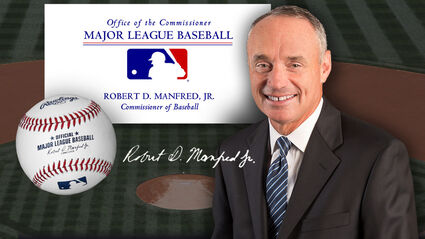 Last week’s All-Star Game, which was won by the American League 5-2 without any help from the four missing Houston Astros players, created a lull in the regular season for most major league players.

But the baseball writers corralled MLB Commissioner Rob Manfred and grilled him on future plans or changes he anticipates trying to help speed up the games and produce more offense than during the first half of the 2021 season.

Manfred’s major gripe is the defensive shifts that most teams use—and that the Houston Astros percentage of its use leads the MLB—which are doing exactly what they are designed for—eliminating base hits and reducing high-scoring offensive innings.

When I began playing organized baseball 70 years ago, we always had two infielders to the right of second base and two to the left of the bag. Perhaps no managers or coaches were imaginative enough to move the infielders around like they do today in the majors—and even in college and high school.

It was that way for me throughout Little League, Babe Ruth League, Connie Mack League, high school, college and even as a pro back in the 1960’s.

There were no aluminum bats or designated hitters and we were taught to break up double play attempts that today can be ruled as baserunner interference. And in college, if we didn’t knock a batter down on an 0-2 pitch, we would be running laps the next day.

Manfred is trying to get the game of baseball back to the way it was “before offense was suffocated by analytics” according to an Associated Press article that ran last week.

He added that the crack-down on the use of foreign substances on baseballs has been a success since umpires started checking pitchers on June 21 and “is a step along the road to a return to a more entertaining form of baseball.”

The commissioner told the Baseball Writers Association of America during the All-Star break that seven-inning doubleheaders and starting extra-innings with a runner on second base likely would be dropped after this season.

These were implemented during the COVID-19 pandemic to speed up the games and to make up games canceled by the pandemic-shortened 2020 season when there were no fans attending the games. However, this season, some fans felt short-changed when they paid full-price for tickets for split-doubleheaders of seven innings each.

Manfred said that extending the designated hitter to the National League could be possible but not definite. “I think it would be a non-radical change, but I’m not going to speculate on whether we’re going to propose it or get it,” he told the baseball writers.

He also hinted that MLB was considering having umpires explain video review decisions to fans at ballparks over the public address system, similar to the procedure in the NFL,

Regulating the shift by requiring two infielders on each side of second base will make the game look like it did when I was in Little League, “It’s not a change, it’s kind of a restoration,” Manfred pointed out.

“That’s why people are in favor of it. And they do believe, I think front offices in general believe it would have a positive effect on the play of the game,” Manfred concluded.

MLB is trying an experiment this year in Class AA requiring infielders to keep both feet within the outer boundary of the infield dirt at the start of every play, but not preventing three or more defenders to either side of second base, the Associated Press article pointed out.

Hopefully, the commissioner will be able to satisfy the fans who complain that today’s game of baseball is too slow, too boring and outdated, old-fashioned and behind the modern times.

KWICKIES… Collin Morikawa fired a bogey-free 66 Sunday to win the British Open by two strokes over Texan Jordan Spieth. The 24-year-old Californian is the first man to win a major tournament on his first try. He won the PGA in 2020. The major victory was worth $2.070 million.

Houston Astros first baseman Yuli Gurriel, who is having his best season ever as a major leaguer, has matched his career-high with 37 walks in 87 games. His 37 walks in 2019 came in 144 games.

St. Louis Cardinals relief ace Alex Reyes has set a major league record by saving 24 games in 24 tries. He has a miniscule 1.46 ERA.

For the second time in franchise history the New York Mets defeated the Pittsburgh Pirates 7-6 after trailing by six runs after in the first inning.

After losing their first two games to the Suns in Phoenix, the Milwaukee Bucks came roaring back to win the next three in the NBA Finals. The Bucks could wrap up the World Championship with a win last night in Milwaukee.

It’s about time those folks in Tennessee realized that former Houston Oilers coach Bum Phillips was pretty darned good and announced that he will be inducted into the Titans/Oilers Ring of Honor Sept 26. The Orange native transposed a team that hadn’t been to the playoffs in eight years into a “Luv Ya Blue” team that just couldn’t get past that Steel Curtain of Pittsburgh, but had two AFC Championship appearances.

JUST BETWEEN US…For a team that is supposed to be the best in batting average and runs scored, our Houston Astros certainly started poorly after the All-Star break. After whipping the White Sox 7-1 at Chicago Friday, they managed only three hits while getting walloped 10-1 Saturday and then were held to only Jose Toro’s single in Sunday’s 4-0 blanking. The Astros returned to Minute Maid Park Monday and began a three-game series with the Cleveland Indians followed by three with the cellar-dwelling Texas Rangers. The good news is that Houston still leads the AL West Division by 3½ games over the Oakland A’s through Sunday’s action and that Jose Altuve became the fourth Astro to get 1,700 hits. He follows Craig Biggio (3,060), Jeff Bagwell (2,314) and Jose Cruz (1937).