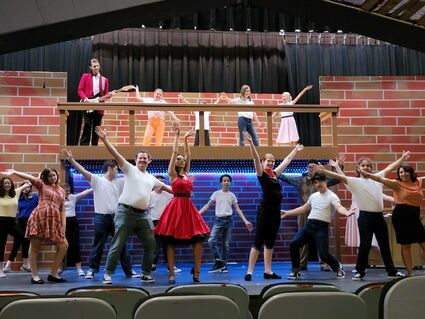 Pictured in the red dress in the center of the cast of "Grease" is Orange's own Kiera Howington cast as Cha-Cha DiGregorio. "Grease" begins its three week run at Port Arthur Little Theater Friday night at 7:30.

Several members of the Orange County community will take the stage at Port Arthur Little Theater's (PALT) production of Grease which starts July 30 and runs for three weeks. Director for the production, Debbie Pletcher, had so many people interested in the production, she was able to have two casts, one primarily teen, the other primarily adults. The two casts will alternate beginning with the teen cast on opening night.

Andy McCall, one of the staff members at Orange's Lutcher Theater is the only cast member to play the same roles in both casts. He snagged the roles Teen Angle/Vince Fontaine.

Brother and sister, Danny Swarers and Kamri Swarers-Howeth of Little Cypress will be in the teen cast playing Roger and Betty Rizzo respectively.

Kamri was excited being cast as Rizzo. "That's the role I really wanted. That's the role I definitely rehearsed for before we started auditioning. When I got it, I just had a lot of fun with it. She has my favorite lines and my favorite songs."This is Kamri's second role at PALT. In 2018, she played Penny in "Hairspray."

"I love 'Grease.' It's iconic. I had nothing else to do this summer," said Kamri. "I just had a baby, I don't have college, because it's summer semester, my husband was shipping off to the Army, so I just wanted something to pass the time and get some 'Me' time."

Her favorite thing about the production has been the dancing. "It's definitely not my strong suit, but dancing with all my friends, because we're supposed to be having fun during the dance competition scene. Honestly you don't even have to try, because you're doing it with some of your favorite people."

John Gray, also of Orange, is the choreographer for the production.

This was Danny's first time in a PALT production. "My sister told me it would be a fun experience."

When school starts, Danny will be a junior at Little Cypress-Mauriceville High School.

"I've done a few high school plays," said Danny. "Blue Stockings" was one of those performances.

His favorite thing about this experience is the cast. "They're all funny people," he said. "They are a lot more laid back than school theater."

McCall piped in that during a backstage discussion, Danny disclosed he hadn't realized he could sing so well.

"I've had no prior choir experience except for half a year," said Danny. He said his favorite song in the production is 'Mooning'. It happens to be his shinning moment where at the end, he moons the crowd at the park. It is one song, that is not in the film and the scene is portrayed differently from the movie.

McCall said he was part of the production of "Grease" when they did it 10 years ago. He couldn't audition back then, because he had no voice, due to laryngitis.

"I called Debbie up and she said it's ok, I know what you can do, so just show up at the auditions," said McCall. He showed up, with no voice, and she cast him as Teen Angel. He wound up not being in the start of the production, because a dinner theater needed a lead character and the show was running concurrently with the first part of "Grease's" run. Pletcher gave him her blessing to do the dinner show, "It was a Casablanca spoof and I'm a huge Humphrey Bogart fan." He then returned to the "Grease" cast and finished the run.

"It's a fun role," said McCall of playing Teen Angel. "It's got that one song, 'Beauty School Drop-out'...it's a potential showstopper song because you belt it out and it's got cool dancing behind you. I remember family laughing when I did it last time."

"I'm Vince Fontane and Teen Angel this time," said McCall. "It's been fun to do the whole process of the show this time as opposed to the last time. Then, I showed up on tech week, just to learn where I was supposed to be, so I wasn't part of the whole 'Grease' rehearsal process last time."

McCall has been part of over two dozen shows locally, through the years. "It can get kind of tiring during the rehearsals, but once you get the crowd in here, clapping, laughing and cheering, it makes it worth it."

Mother/ daughter duo of Becca and Kiera Howington of Orange are split between the casts. Becca is cast as the adult Marty and Kiera is the teen Cha-Cha DiGregorio.

Becca has been in three PALT productions previously, including "Tom Sawyer," before being cast in "Grease."

Kiera started at PALT last summer for "Singer and the Star Catcher."

"We've been here ever since," said Becca. "Almost every show, we've been a part of since last summer."

Kiera had done a few shows at Orange Community Players, Inc. in Orange, before the theater was forced to close in 2017 after damage from tropical storm Harvey flooding the building. Becca said she had participated in OCP's summer camps years ago when she was a kid.

"I stopped. I never intended to start back up," said Becca. "But then I came here with her and I got the nudge. Somehow, I keep getting nudged. I love it and I like to help."

Kiera said she prefers comedies over musicals but wanted to be part of a big production musical like "Grease." She didn't try out specifically for Cha-Cha and was willing to do any role she fit.

"I'm really happy I got Cha-Cha. I'm really enjoying the role," she said. "My favorite number is 'Born to Hand Jive' because that's when her and Danny win the dance competition. The actor who plays Danny in the teen cast is a really cool person and is really fun to dance with."

Her mom's favorite scene is the Marty bedroom scene. "That's where I get to sing my solo," said Becca. "I've learned to push my boundaries and sing louder than I would in front of people instead of in my car." 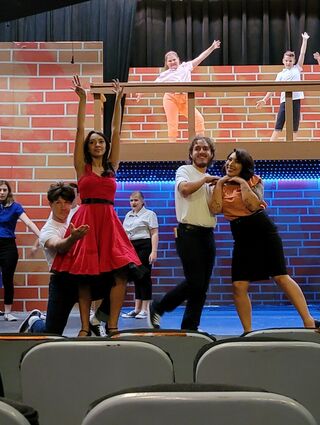 Although the stage production has many variances from the movie, there are still many of your favorite songs including: "Summer Nights," "Greased Lightening," "Hopelessly devoted to You," "Look at Me, I'm Sandra Dee," "Born to Hand-Jive," "Beauty School Dropout," "Sandy," and "You're the One That I Want."

They have some great voices cast.

"Our Danny and Sandy in both casts are blowing me away," said McCall. "It's really coming together."

Tickets are $15 for adults, $13 for senior citizens, teachers and active-duty military and $11 for students. They can be purchased online at palt.org or reserved by calling 409-727-PALT. Reserved tickets are held until 15 minutes prior to opening curtain.

The theater is located at 4701 Jimmy Johnson Blvd., Port Arthur.