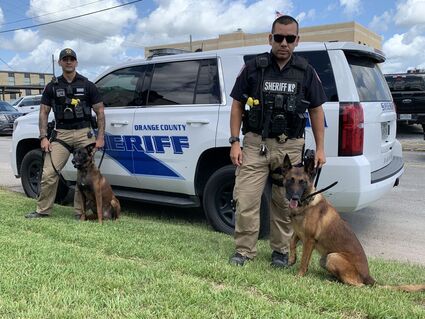 Their 3-year-old Belgian Malinois Shepherds definitely – to quote McGruff – take a bite out of crime.

Bad guys won’t want to see their dogs up close.

“Having them makes people second-guess whether they want to run from us,” Mojica said.

“They can see and sense and smell a lot more than me and my partner,” Arriola said.

Orange County had deployed dogs on patrol in the past, but when Lane Mooney took over as Sheriff a year ago, there was no active K-9 unit.

Both Mooney and his Patrol Captain, Chris Frederick, are both former K-9 handlers and they wasted little time in reactivating the K-9 unit to assist with narcotics and weapons searches, fugitive tracking and suspect apprehension.

The Sheriff’s Office used asset forfeiture funds to buy the dogs from a Louisiana trainer for $10,000 each. Then the two deputies spent a month training with the dogs last spring before they moved them to Texas.

“These dogs are from overseas,” Arriola said. “They start training them when they’re puppies in basic obedience.”

They each have been with the OCSO for about a year.

Neither one had been a K-9 handler before.

“I brought it up to my supervisors,” Arriola said. “I wanted to put my name in to work with the unit.”

Mojica, who owns two dogs of his own, wasted no time applying for K-9 duty.

“I heard they were bringing in dogs, and I jumped at it,” he said.

The dogs resemble a German Shepherd, which is a distant cousin. The Malinois’ breed of medium-sized herding dog is also often called a Belgian Sheepdog.

The dogs live with their handlers.

“I already had a Golden Retriever and a second mixed dog at home, and I love all three of them,” Mojica said.

“But I have to keep her [Phoenix] away from the others. She looks like she wants to love them, but I don’t know …

“We’re lucky to have Sheriff Mooney and Captain Frederick to ask when we have questions about the dogs.”

When traveling, the dogs ride in air-conditioned kennels in the back of their handlers’ county-issued Chevy Tahoes.

“We’re their owners,” Arriola said. “We keep them, feed them and care for them. The cars are outfitted for the dogs.”

In their training, Arriola and Mojica took their turns posing as bad guys, each wearing the thick “bite suit” while the other learned the chase bad guys.

“If they have a hard bite, you can definitely feel them clamping down on you,” Arriola said. “It’s pretty intimidating when they’re chasing after you.”

Mojica says he and Phoenix have worked together to make arrests for those with outstanding warrants, search for narcotics following traffic stops. Arriola said he and Rudy had made a number of narcotics stops.

But the highlight so far for the K-9 handlers was using the dogs to locate a prisoner who escaped from a transport vehicle.

“That was an eye opener,” Mojica said. “It was the first open-field tracking I’ve done, going through thorns and all of that.”

The tracking took place in Rose City, over some swamp land across Interstate 10 from the Boomtown lake.

“We kept them on their leads,” Arriola said. “We went through all the woods.”

“In Orange County,” Mojica said, “there are so many trees, once you lose a guy it’s pretty hard to find them.”