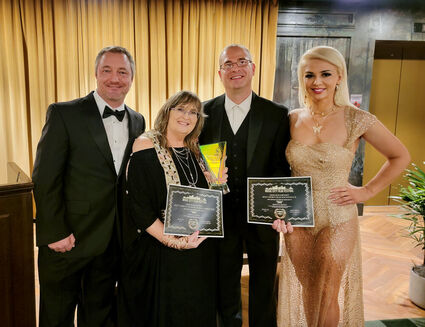 “I’m so excited to be hosting the Music City Film Festival,” said Jenny G. Jackson, festival director. “The magic of movies is where music meets film.’”

This was the inaugural event for the film festival and one of the first events to be held at the new venue.

“This year we are focused on building strong relationships that will be able to grow with us as we continue to scale in years to come,” said Jackson.

Rogers and been a symphonic composer and a high school band director for many years, but this was his first time to write a score for a film. When LeLeux contacted him about writing the score, it was fulfillment of a lifelong dream.

LeLeux told a stunned Rogers about the win when they were stopped at a McDonald’s while headed to Nashville. First, his head hung in disbelief, then he hugged her.

“I couldn’t be happier. Oh my gosh, this is fantastic! I’m a little speechless because I’ve had like four hours sleep,” said Rogers. The trip to Nashville was an immediate turnaround from a trip to San Antonio for a band directors conference. “Thank you, it’s going to take a bit to process all of this.”

The film also contains original songs from local or native singer/songwriters Mike Magnuson, Rick Tiger and Robert Watts which also share in the soundtrack award. An earlier version of the film also contained and instrumental piece, by Bob Manning, but it was removed and replaced with the original score, which was created to better fit the opening scenes of the film.

Two years ago next month, “Shhh” started shooting in Orange and Bridge City. Trying to shoot 18 pages in two days in four distinct locations is mad by anyone’s standards in the film world, but it was done.

Almost all the cast and crew were from Southeast Texas, with a vast majority coming from Orange County.

The film was the brainchild of LeLeux of Orangefield. She wrote the script as part of the NYC Midnight screenwriting challenge where she was given three parameters and eight days to write a maximum of 12 pages. “Shhh” was born in April 2019.

The film’s logline reads: When a pharmaceutical spy ducks into a library to avoid capture he encounters a potential partner/love interest in a librarian looking for adventure and a new job.

“As soon as I finished the script, I realized we could produce it ourselves and use it to promote the talent and locations in our area,” said LeLeux.

She contacted an actor friend originally from Bridge City, Woody Almazan, to play the male lead and contacted a producer friend in Nederland, Doug Underwood, of Fresh Productions.

Next was a trip to the Orange City Council for permission to shoot in the Orange Public Library and outdoor scenes in downtown Orange.

With the city’s blessing, they moved forward in preproduction with casting, crewing up and securing other locations. The Rustic Saloon in Bridge City and International Apartments in Orange also agreed to let filming take place on their property.

She contacted several singer/songwriters she knew, because she also wanted to showcase local musical talent in the film as well.

Magnuson and Tiger gave her their entire catalog to choose from. Two songs, “Dig a Lotta Dirt” and “Fallin” were selected for the bar scene.

“I don’t know why these songs haven’t been playing on jukeboxes in bars already, they are amazing, and I am so honored to have them in the film,” said LeLeux.

The pandemic shut down caused most film festivals to go virtual or cancel altogether last year. Even so, the original 20 min. film screened at festivals in San Francisco, Huntsville, was nominated in New York, made the quarterfinals at Stage 32 and won 2nd place in Sulphur at the Calcasieu Parish Short Film Fest. It was also screened at an outdoor drive-in event at Beaumont Community Players in February.

“After initial feedback and judges’ comments, it seemed we might be riding the bubble on acceptance at some festivals and I felt we needed to shorten it a bit for time and cut a little bit of the cheese. I love cheese but knew there was too much. A bit of re-editing was needed.”

She also contacted Rogers to see if he would be interested in creating an original score for the film.

Rogers was a classmate of LeLeux’s children, so she had been aware of his talent and thought he would be up to the challenge. She never forgot the first time she heard one of his concert pieces premiered by the high school band.

“I remember thinking, that sounds like it should be in a movie,” said LeLeux.

“I was delighted,” said Rogers. “It had been a lifelong dream of mine.”

“I really like the music,” said Travis Myers, cinematographer/editor for the film. “I feel like it’s a whole new short.”

The film still needs some minor additional sound production and effects, but LeLeux didn’t feel it was enough to keep from submitting to a few festivals whose deadlines were coming up.

“The film ‘Shhh’ and it’s talented cast caught my eye from the very beginning with it’s well choreographed, suspenseful action all the way to the very end,” said Jackson. “And I particularly like the scene where the director, Penny, had her cute cameo. It was from that moment I knew I had to meet her.”

“In the past one might think that everyone in the entertainment industry would generally know one another in music and film, and while that is true in many cases, having festivals like the Music City Film Festival provides a platform for inspiring new projects and creating fun, future work opportunities for creative people in Nashville and around the world,” said Jackson.

“We are so excited for the future of the new version. To win right out of the gate in the first festival it was submitted to is very encouraging,” said LeLeux. 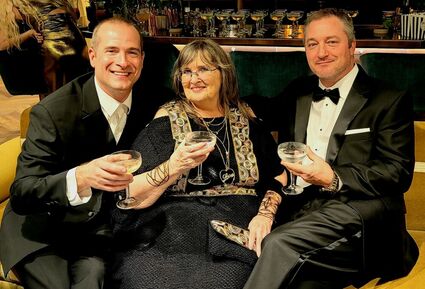 “It is such an honor to be able to bring cool people together to do cool things,” said Jackson. I can’t wait to see what greatness the future has in store for everyone who is joining us here today at the Music City Film Festival!”

While driving to Nashville, LeLeux received notification that the film is selected to be part of the Cannes Short Film Festival. With travel restriction still in place in France, the festival will be online once again this year.

“C’est la vie,” said LeLeux about missing a chance to go to France. Maybe next time. “But hey, that’s only the second notification we’ve received on the new version and they’ve both been yes. Things are looking pretty bright for film in Southeast Texas and that was the goal.”