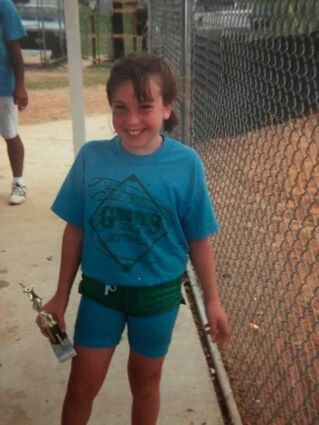 My daughter, Jessica, was fortunate to have a coach who changed her all too brief life. Coach Frank gave her a second chance to actually play softball and more importantly believed in her. She carried the lessons she learned with her, such as not giving up and hard work pays off for the remainder of her life.

Jessica will forever be 21 years old since gallstones took her life in 2009. Each year on her birthday I choose to celebrate her life in hopes of shedding fewer tears from the grief of losing my one of a kind daughter.

Jessica was seven years old when she wanted to play softball. The blonde haired and blue eyed tomboy loved adventure and believed she could do anything. Her stubbornness and desire to push through adversity had carried her through some tough times.

However, her faith in herself was short lived the first time she took the field. Jessica couldn’t manage her glove, catch a ball or connect the bat to the ball.

It wasn’t for lack of trying. She always gave everything she attempted all her might, over and over again.

I tried to work with her in the yard and slowly she got better. Jessica wasn’t the only one on the team who was just starting out. I thought this would work in her favor. But, it didn’t.

Jessica had two female coaches her first year. They played her the minimum amount of outs on the field. She usually got to bat at least once a game.

I overheard one of the coaches telling her as she was up to bat, “just stand there, maybe they will walk you.”

It was hard for me to hold back the tears when I heard the coach but, Jessica’s smile never faded. She was just happy to be playing softball.

Jessica continued to play softball each season and gradually got better. She went to every practice and game. Each day after school she would rush around to get ready and her brothers had better not make her late, she would say.

Finally, a coach who believed in her chose Jessica to be on his team. At first I was worried because I had heard he could be kind of gruff. But, I quickly learned he was going to take this little diamond in the rough and she was going to sparkle.

It wasn’t long and Jessica was hitting the ball and running towards first base regularly. She would grin broadly as she crossed the base. She would listen and watch intensely for the OK to run to the next base. Finally, with the resounding thud of her cleats she crossed home plate. It was as though she was determined to make sure, loud and clear, she made it home.

It was her intense and captivating smile as she crossed home, others would remember for years to come when they reminisce about her. For this, was true joy.

Jessica’s field position was left field. It is not the most desirable place to be for most players. However, Coach Frank once told me he put her there because he knew that he could depend on her to back up the basemen, field the ball or run to center in lightening speed.

Jessica loved the whole softball experience, including the chants in the dugout. Often heard above the cheers of the game was Jessica laughing and giggling. After a pitcher threw an extremely low pitch, Jessica could be heard chanting, “get those worms a helmet.” Then followed by more distinct laughter.

During the seasons on Coach Frank’s teams Jessica found what she was looking for when she decided to play softball. She wanted validation and to simply love the game. An occasional “good job” served dual purpose and was all she needed to make her want to persevere even more.

Jessica collected many softball trophies during her seasons with the league. She also participated in many tournaments too. I still have the trophies boxed up unable to part with them and the special memories they provide.

I will be forever grateful to Coach Frank for what he gave Jessica. Coaches are volunteers of their time. Coach Frank took it a step farther when he gave his heart by believing in her and as a result changed her life.