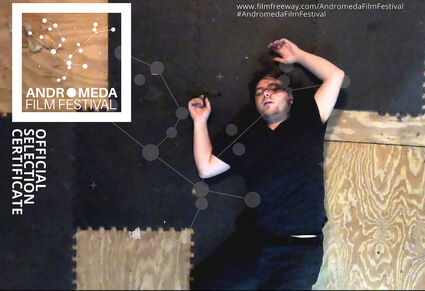 There is nothing like an impending 30th birthday to light a fire under some people. Such was the case for Jimmy Womack of Vidor. That and the fact that the pandemic gave him more time on his hands to think about it.

“When I found out we were going into lockdown last year due to the Coronavirus, I thought this was the perfect opportunity for me to practice, by making a project. I thought why not do it by myself. I’m not going to have anyone to assist me,” he said.

First, he had to devise a story he do only having himself as cast and with locations available to him during the lockdown.

“The majority of the film is shot in my recording studio,” said Womack. “I tried to trash it up to make it look as crazy as possible.”

The story developed about a guy with multiple personality disorder and the character discovering that reality as the story progresses.

He started filming in the middle of April 2020 and completed principal photography at the start of March 2021. He spent a month before that storyboarding and writing. He had a shot list of over 300 different shots. Postproduction took about three months, editing and developing the music.

“I finished post in late July. My whole goal was to have it done before my 30th birthday. I wanted a project that I could be proud of that went over that 20-minute mark, where I could say I’ve done this before I was 30.”

Womack knows he’s younger than a lot of people in the film industry, but he wanted to have that one project he could look back on later in life and say he completed that mark.

“I’ve only done ‘minies’ up until this point,” he said.

Womack started his film career when he was 14 years old. He asked his mother for a camera for Christmas. She gave him a DVC camera and he started shooting micro shorts, only a couple of minutes long on mini DV tapes. That’s when he got the bug.

He went to Lamar University and majored in film. There he did several five-minute films on 8mm film stock and completed several group projects. Womack also completed four or five 48-hour film races, most under four minutes. The longest film he had completed before now was his senior thesis film, which ran 18-19 minutes.

“When I look back at it, it’s kind of hard to watch. I was still learning. In that thesis I was trying to prove to my teacher and my peers, ‘look what I can direct’ but when you look back, the story is not there. There are so many little mistakes in it. I was trying to be the biggest, craziest director,” admitted Womack. “I guess it just takes plenty of times failing before you realize the fine line between the good story and the great camera angle. If the great camera angle doesn’t do anything for the story, what’s the point in it.”

Story is what he still struggles with. 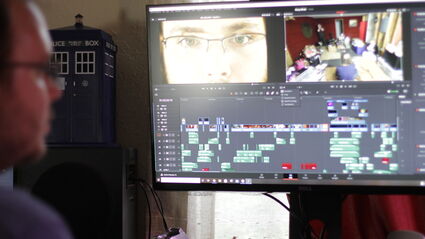 Womack played five different roles in the film. The only other person in the film is his wife Melinda, appearing briefly as a nurse near the end.

The story is quite a mind trip. Some of the images from the film are reminiscent of a 1930s propaganda film “Reefer Madness.”

“Alone + Together” was accepted into the Andromeda Film Festival in Turkey. Womack hopes it is one of many film festivals to select it over the next year. He hopes to one day get a submission into Sundance.

Womack is now working on a situational comedy project, which is totally out of his comfort zone.

He celebrated his 30th birthday this past weekend.