Waterfront views no match for floodwalls 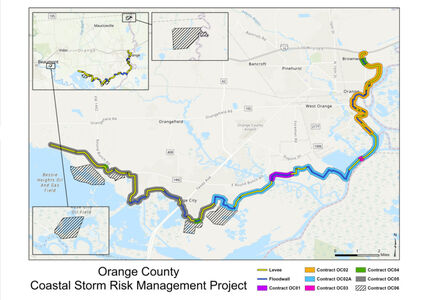 If you live on the East Side of Orange and always wake up with the sun, you’d better start putting money aside for a reliable alarm clock.

The Orange County Coastal Storm Risk Management Project, or “Ike Dike,” could delay sunup for hundreds – nay, thousands – of expert home remodelers who have done it themselves more than one time lately.

Instead of watching the sunlight poking through the trees, residents must now wait for it to first climb up over a 14-foot floodwall or maybe an earthen levee 11 feet high.

The Ike Dike has been in the works since Hurricane Ike struck near Bridge City in 2008, wrecking or outright washing away most of the homes.

Storm surge was recorded up to 12 feet as it blew across Sabine Lake and into the southern end of Orange County.

The project design agreement was OK’d last fall and a plan to spend $2.4 billion in state and federal funds is now posted online – swg.usace.army.mil/S2G/OrangeCounty/ .

The target completion date is 2028 and when it becomes a reality, everyone on the “right side” of the levees, floodwalls and pumps should breathe easier.

In the short time, well, it was nice to dream of eating a meal at the Boardwalk Grille before a show at the Lutcher Theater, then walking back across the street to visit the ice cream parlor next door, maybe even buying an “Orange You Glad?” T-shirt.

“I haven’t seen or heard of the final study yet, but we only have a small section of downtown that would be affected,” said Clyde “Tad” McKee, CEO of the Stark Foundation.

“But I think the benefit outweighs the negatives. While we love the view of the water, we think it’s much more important to protect the residents inland.

“If we want to keep people in Orange, we have to mitigate these circumstances the best we can. I think it’s a little price to pay for the protection it will afford.”

While the Orange CSRM project is just a part of a much grander project that runs south, past Galveston Island to Brazoria County, the Orange County portion will begin at the Bessie Heights Marsh.

It essentially runs parallel to Roundbunch Road on either side of Texas 87 until it becomes a huge levee south of Chemical Row plants, then follows the Sabine River north to downtown.

Another man who spends a lot of time downtown, Lamar State College Orange president Dr. Tom Johnson, said he was too locked in on the people and programs on his campus to follow closely the Corps of Engineers’ plans.

“I’m kind of detached from that,” Johnson said. “We’re just trying to get registered for the fall, which starts in three weeks – Aug. 23.

“I’m not sure exactly where it’s going, or how it’s going to work. Those are things bigger than me. I’m just waiting and seeing.”

In a feasibility study written for the project in 2017, it points out that the six-county area for the entire Sabine Pass to Galveston Bay CSRM – Harris, Brazoria, Galveston, Chambers, Jefferson and Orange counties includes 5 million people, about half of whom live in storm-surge inundation zones.

Also noted is the cost of doing nothing: A one-month closure of the Houston Ship Channel would cost the national economy at least $60 billion. 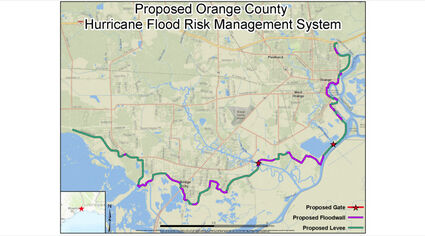 Current plans for the Orange CSRM call for approximately 15 miles of new levees, 10 miles of new concrete floodwalls and gates, seven pump stations to mitigate interior flooding during surge events, and restoration of about 1,000 acres of marsh and wetlands.

Property acquisition should begin this fall or early 2022.