It's back to school for Windee Jenkins 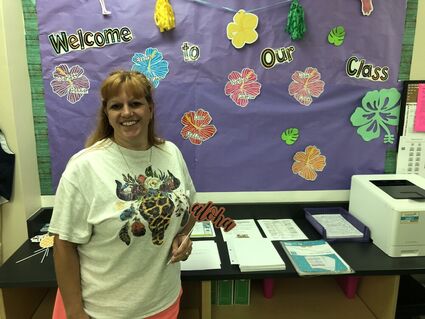 Windee Jenkins, Orangefield ISD paraprofessional is excited to welcome students to the elementary classroom for the 2021-2022 school year.

Monday was 'Meet the Teacher' day at Orangefield with first day of class for students on Wednesday.

Windee Jenkins, a paraprofessional at Orangefield ISD for 16 years has worked on all three campuses.

"We help the special needs teachers with the children," said Jenkins. "We're an extension to the teacher."

She has also driven a special needs bus for the district for 14 years.

Jenkins also coached jr. high sports for four years in the mix - volleyball, basketball and track. She coached until her sons came of age for extracurricular activities.

Jenkins has been married for 26 years to former Orangefield Ag teacher and current Justice of the Peace Pct. 2 Chad Jenkins.

An interesting little side note: former JP Pct 2 Roy "Derry" Dunn was not only Chad Jenkins predecessor as judge but was also the one who gave him his first job as a teacher 28 years ago at Little Cypress-Mauriceville CISD where he spent his first year and a half of teaching, before going to Orangefield ISD the beginning of the 1994-1995 school year.

The couple has three boys: Tanner, 24; Tyler, 23; and Trever, 19. All three boys took after their dad, with an interest in agriculture. The youngest just received a scholarship to show cattle for Trinity Valley Community College in Athens, Texas.

For the last five years, Windee Jenkins has been at Orangefield Junior High School. Friday, they moved her back to the elementary.

"They needed me here," she wrote in a text message setting up the interview. She added, "Little kids always love you."

At the elementary school, her students will range from 3 years old in PreK through 5th grade. Right now, they have 10 students enrolled. Jenkins said that could change at anytime over the next couple of weeks.

Their classroom is set up in stations around kidney shaped tables, rather than typical desk configurations. Special needs classes deal with more life skills and teaching in ways that is more suited to the way the students learn according to their abilities.

"You have a bad day; they make you have a great day. They fight every day for the things we take for granted," said Jenkins. "It reminds you so much, just how precious life is. It's a rewarding position to be in. You know every day you are going to make a difference in somebodies' life."

For some, just learning to tie their shoe can be a major accomplishment that takes most of the year.

She loves when students can accomplish things they were never expected to, such as read. Jenkens said they manage to get about 50 percent of the students to accomplish skills beyond what doctors and parents expected was possible.

"It just took a little longer on some of them. You just have to give them their time," she said. "They're determined. They are gonna do it."

Victories are celebrated with food. "They love to eat."

Her favorite day at the jr. high, before COVID-19 shut everything down, was Friday. They had a bakery in class and on Fridays, the student made cupcakes and mini-Bundt cakes and sold them to the teachers. Those that could read, would read out the recipes and those that couldn't read would work on their math skills by measuring out ingredients. It was a joint effort by everyone to help make money for the class.

Jenkins said she isn't sure how much cooking will be done with the elementary student, "I'm sure we'll do some cooking."

One program she started that will continue at the elementary is her Secret Santa program for the teachers.

"They fill out what their favorite food is, their favorite cookie, favorite drink," Jenkins said when the day comes, everything is brought into one room and the kids sort it out.

"They get dressed up and start singing down the hallway." Jenkins said they deliver the gifts loaded in a decorated cart. "They enjoy giving the presents to the teachers. They get to bring a smile to someone else's face."

Jenkins isn't nervous about the last-minute switch of campuses. "I've been here before. The kids just love you. They make it easy to adjust."

How long will Jenkins continue at her job? "As long as I can," she said.

Jenkins will be celebrating her 46th birthday Thursday.