The times and trains a far cry from life today 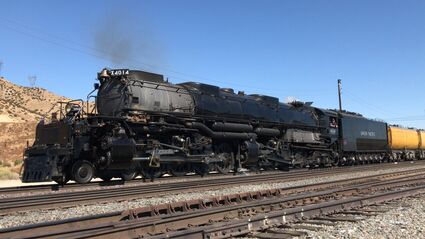 Union Pacific's Big Boy No. 4014 steam engine train arrives in Orange Thursday for a whistle stop at 9:30 A.M. at Holly Lane crossing. The engine was built in 1941, during WWII. The smaller steam engine train played an important part in my childhood and the coming of Big Boy prompted me to write about it. I loved those old trains. Our house, a one-room shack, rested next to the railroad tracks and an old sugar cane derrick. The derrick was a beehive during sugar cane harvesting time. At an early age, I started hanging out with the men at the derrick. A horse-drawn wagon would pull up to the scales, drive under the derrick, hook onto the long cable attached to chains, wrapped around the cane load then hoisted into a boxcar to be delivered to the Steen Syrup Mill. Often as many as a dozen wagons would be waiting their turn. The men would congregate in the scale shack and warm themselves by the old barrel stove. Mornings in late September and October, were often nippy and sometimes downright cold. Some of the wagons had come from many miles away. They loaded the evening before and pulled out by lantern light. The cane had to be gathered before a freeze came or else it would sour.

If the horses weren't skittish, the men would let me tend to their wagons. I'd unload it and drive it back to the scales where it would be weighed empty. Before too many years went by, larger wagons pulled by tractors started showing up. Sometimes a tractor would pull two wagons. That's where I learned to drive a tractor. I wasn't paid anything, but that didn't matter. I loved doing it and it gave me some importance. I'd also start the fire in the barrel on a cold morning. I've always been an early riser and was at the derrick when the last wagon was unloaded at night. I chewed all the Blue Ribbon cane I wanted. That was as close to candy that I would get. One of the men had given me a pocketknife and the scale tender kept it whet-stoned sharp for me. I often chewed cane until my jaws couldn't take it any longer. I was the undisputed sugar cane peeler champion. I could peel six or seven joints at a time, quarter them and cut them into one-inch lengths, knots and all, in record time. In fact, after eight decades, I bet I could still be good at it. Those were great days. I was the only kid in a grownup world. My volunteer chores at the derrick were all the entertainment I needed. Later, I would end up cutting cane in the fields for pay. If you can imagine a poor Cajun kid with no daddy receiving that attention at the derrick, you can understand why it constituted such an important period in my young life. Like any hyperactive and daring kid, I got into my share of trouble at the old derrick. Once, when a team of mules decided to take off, they took me for one hell of a ride down the gravel road before I could get them stopped. Another time, I was in a boxcar loaded with cane while the train was hooking up. The steam locomotive slammed into the car, the load shifted and buried me under the cane in the process. Luckily the brakeman heard me scream and dug me out. I really got a scolding. I often rode a loaded car to town and attended a picture show with some of the small change the men would give me.

During the off season, when the derrick wasn't in use, I'd climb all the way to the top of the pole where I could see for miles. I would see the steam engine smoke long before I saw or heard the train. The other kids wouldn't do it, so I must have been the only idiot around. My climbing days came to an end when Mom caught me hanging from the top. She hollered, begged and prayed me down. She latched onto me and wore out the hide on my backside.

The location was also a switch station, so I got to meet many hobos and men riding the rails. The engineers sometime brought me some comic books put out by PanAm Oil Company. I remember meeting a young man I've called "Hobo Bill." He must have been in his early twenties and played a guitar. He sang a song that I have spent a lifetime trying to fine the orgin of. Some of the words I remember went like this, "I traveled home one day, where I use to run and play, only to find I was too late, Old Rover was gone from his pallet on the lawn, the old folks had died or gone away."

Being raised alongside the railroad tracks, with the old steam engine trains, was important to me then. Those formative years, associated with trains and tracks, left their mark on me. Today, I cherish the memories. Even now when I hear the sound of a train, even though they don't sound the same, my ears will perk up. I guess it's like the kid raised in East Texas listening to the barking of the coon dogs, some soft and deep, others high and loud. I bet even today a coon dog treeing is music to their ears. 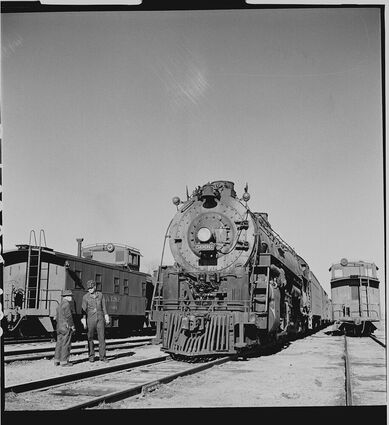 The moral of the story is that the very young are often taken for granted with no thought given to what they are exposed to, the attention they receive, if their life is happy or if they are building self esteem. Believe me, it follows you through life. A few men paying attention to a poor, ragged, fatherless boy gave me an early feeling of being worth something. I could have easily gone the other way if I would have been mistreated rather than well treated. You can make a lasting difference, good or bad, in the life of a young child.

I've only personally known one train engineer, William "Bill" Smith, who spent a lifetime guiding trains down the tracks. The 91-year-old started in Arkansas with the steam engine. He has had a life long love affair with that old engine. His son is taking him to see Big Boy Thursday.