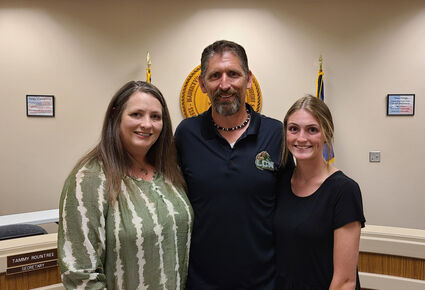 The LCM Board of Trustees appointed Jeff Hill to Place 3 at the August Regular Meeting earlier this month. The appointment comes following the resignation of Marlene Courmier from the seat in July. Mr. Hill is a longtime resident of the district. He moved to Mauriceville in 1990 and graduated from LCM in 1991. Following graduation, he enlisted in the USAF. After serving his country, he returned to Mauriceville and attended Lamar University in Beaumont.  In 2000, he graduated with a Bachelor of Science in Kinesiology.  He and his wife have owned Cakes Plus for over 20 years.

Currently, Mr. Hill works for Exxon Mobil in Beaumont as an operator. His wife Natalie is a lifelong resident of Mauriceville. They have a son, Chaz, who graduated from LCM in 2019 and is now in his junior year at the University of North Texas. Their daughter, Matalyn, is a senior at LCM and is a drum major for the Battlin’ Bear Band and goalie for the soccer team. Mr. Hill says he is looking forward to serving on the school board because he cares about the education and future of the students across the district.

“I believe we are responsible for providing the best opportunities available for our students to be productive citizens, whether that is pursuing a college degree or going to a trade school. Our children are our future,” Mr. Hill said. “Thank you for the opportunity to serve.”