Holt: a lifetime of community service 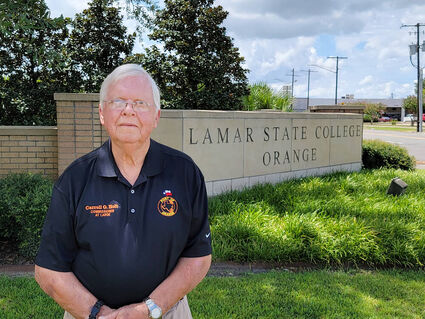 Carroll Holt was instrumental in the founding of Lamar-SCO when it was Tilley Tech. RECORD PHOTO: Penny LeLeux

His family was part of the swell that swarmed the city when shipbuilding for War World II became a huge boom for the city. Orange grew almost overnight from a population of around 7,500 to over 70,000. It created a huge housing shortage, but the Holts were lucky.

"We had a three-bedroom place over on Main Street that we rented," he said.

It gave them an extra bedroom that became a "hot-bed" of activity. The housing shortage was so severe, people would rent out bed space by the shift.

"They encouraged people that had a home to provide a place for people to stay because Riverside and Gilmer homes addition, they were working on all that, but it took them a while," said Holt. "She had one bedroom and she had two people that slept on days, two evenings and two at night, just to have a place to sleep and take a bath. It was that bad."

When one person would get out of bed, another person would crawl in, never giving the bed time enough to cool off in between. The shipyard was busy 24 hours a day building ships for the war.

Holt said the trains stayed busy too, bringing workers from Beaumont for each shift.

Riverside was built so close to the shipyards because most people didn't have cars and walked to work.

"They looked like ants," said Holt about the swarms of people walking to and from work at shift changes.

Schools were so overwhelmed with children they built little "huts" around the campuses, each for a single class of students.

Holt said once the Riverside community was built, there were three elementary schools in the project. One of those schools, Tilley Elementary, became to first site of the Lamar Extension Center in Orange in 1969, frequently referred to as "Tilley Tech." More on that a little later.

He attended Stark High School, Holt spent a few years at Lamar in Beaumont, studying geology, before he was drafted.

"I was caught in between Korea and Viet Nam and pulled duty on the Russian border two years."

When he returned home to Orange and got married and started working at Chevron. There wasn't a G.I. Bill in effect at the time, so he couldn't go to school.

After a few years he said, "Maybe we ought to start a little school here." He was part of the original group that brought the school into existence. He said it was so long ago, he doesn't remember all the members of the group that discussed the project and got it started, but they began with four instructors. Heinie "H. D." Pate taught history and Edward Mustard taught economics. The other two taught psychology and building trades.

"Later on, we made enough money to buy the old bowling alley downtown, Sabine Supply at the corner of Front and 5th. Then we made an agreement with Louisiana. Their kids could come here and our kids could go there and they wouldn't have to pay out of state tuition. My daughter was able to get her masters at McNeese," said Holt. "They would come here for the nursing programs. Now we have close to 3,000 students."

He has been a big supporter of the school since it started. He has awarded scholarships for several years.

"I only give $1,000, but that helps a lot of kids. This year I gave it to a young lady that is making a nurse," he said. "I tell them if they finish their education, they can't take that away from you. You've always got a way to make a living."

He donated the first concrete Orange to the school when the Greater Orange Chamber of Commerce started the program and has donated other items for the school including a gator plaque. He has even offered to sponsor a sport of either volleyball or soccer.

"Football is too expensive," he said. "I'm just a working man."

"I think it was a blessing to Orange have a facility of this type in a small town."

He suggested if one day they could build a dorm, the school might even be able to grow more.

A few years ago, Holt was elected to the Port of Orange as commissioner.

"That keeps me busy these days. I retired from Chevron."

He has proposed an expansion project adding berths on the Neches River. The potential looks impressive. He says the Sabine is too shallow for the big ships and super tankers, but the Neches can accommodate them. It is currently being dredged from 42' to 49'.

"The Sabine is only 25' deep," said Holt. "Last year, 20 something billion dollars came up the Neches River. We're not getting anything like that in Orange."

Ships wait several days for a space to unload in Houston or Beaumont, so the supply of waiting ships is there.

"It costs them thousands of dollars a day to wait," said Holt. He said the new ships run on LNG, which they could refuel in Sabine Pass on their way back to sea. Holt will continue to seek support for the potential expansion. 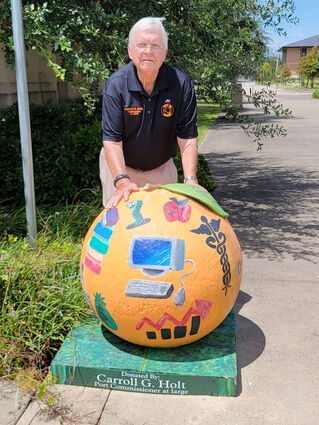 Carroll Holt donated the first orange to LSC-O. He gas been a longtime supporter of the college. RECORD PHOTO: Penny LeLeux

An interesting off topic side note: Holt creates his own vanilla with seeds from Madagascar and 40% Vodka. The seeds cost about $5 each and it takes six to seven to make a quart of pure vanilla. Holt said it needs to be kept in an amber bottle and stored in a cool, dry location. He likes to put a few drops in his coffee.