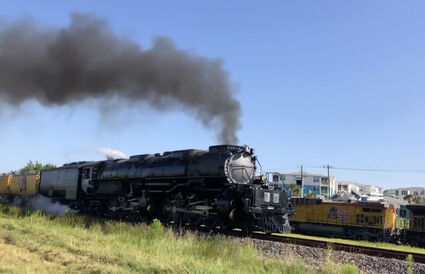 George Bohn has been a train ‘nut’ for more than 60 years, and says it’s an inherited trait, having picked it up from his dad, who began collecting model train sets in the 1930s.

But Bohn, a board member of Friends of the Depot who could tell you weeks in advance all the details of Thursday’s visit to Orange by the largest-ever steam locomotive, is small potatoes when it comes to going the extra mile.

“We’ve got a member of our model train club in Orange who’s a snowbird,” Bohn said. “He lives half the year in Vermont and half down south.

“He’s flying down from Vermont to pick it up in Houston and follow it all the way to Lake Charles.”

It’s no ordinary train that has Bohn and fellow train-lovers excited.

Union Pacific, which helped unite East Coast and West Coast with the transcontinental railroad’s completion 150 years ago, has “Big Boy No. 4014” touring the middle of the country this summer to celebrate railroad heritage and the community the rail line serves.

Big Boy was the name of 25 steam locomotives the company had built during the 1940s and 1950s to tackle the task of hauling huge payloads over steep mountainous terrain.

The locomotives, each nearly half a football field in length and the first able to pull as many as 100 cars, were especially busy during World War II, hauling war goods about the country.

“Big Boy” is so big, it requires 24 wheels, Bohn pointed out. Because of its length, the frames “are articulated, so it can flex around corners,” he said.

Of the eight Big Boys still in existence, seven are on permanent display in museums. Having given way in the second half of the 20th century to more efficient electric-and-diesel locomotives, the only Big Boy still operating, No. 4014, departed UP’s steam shop in Cheyenne, Wyoming on Aug. 5.

It was in Fort Worth last Saturday and Houston Tuesday, Aug. 17. It makes only a whistle-stop in Orange Thursday, Aug. 19 on its way to New Orleans, then returns north, going through St. Louis and Denver.

It will overnight in Beaumont Wednesday, Aug. 18, according to a schedule on the Union Pacific website.

It departs Beaumont at 8 a.m.Thursday and stops in West Orange from 9:30 a.m. to 9:45 a.m. at the crossing at South Avenue at Holly Lane, the schedule says.

“If it’s like most places, things should be quite busy,” Bohn predicted for the brief Orange stop.

Temporary parking will be available at McDonald Baptist Church at the corner of Broad Street and South Avenue.

While the Greater Orange Area Chamber of Commerce is asking folks to welcome the train at Holly Lane, Bohn expects the Depot along Green Avenue at 10th Street will be packed with train fans willing to settle for a thunderous drive-by.

“We’re going to have a lot of people there,” he said. “We’ll have a policeman keeping people from hopping the fence, and a lot of volunteers making sure it’s safe.”

Because of adverse spring weather, the annual fundraiser for the Friends of the Orange Depot has been reset for Oct. 2.

As usual, Bohn’s model train group, the Southeast Texas Model Railroad Club based at Grace Lutheran Church, will have plenty of locomotives running on its scaled-down tracks that day.

The club meets on Monday nights via Zoom, Bohn said, and they meet at the church on Tuesday nights.