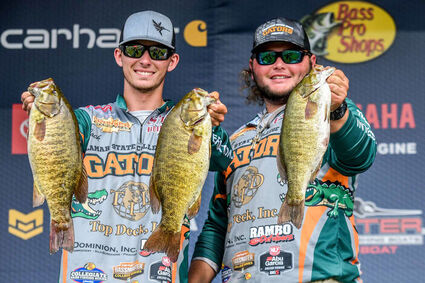 Tindel and Fregia finished 12th in the Bassmaster College Championship held on the St. Lawrence River in Waddington, N.Y.

One hundred and fifty two-man teams qualified for the three-day tournament.

Tindel and Fregia ranked in fifth place after one day, catching a five-fish limit of 21 pounds, 7 ounces.

After a 17-1 bag on the second day, they fell to seventh place but easily made the final-day cut to the top dozen squads.

Tristan McCormick and Stevie Mills of Bethel (Minn.) College were second at 60-7 and Auburn’s Connor Crosby and James Scott took third at 59-8.

Tindell and Fregia finished with a total of 55-1.

Gator fishermen Tindel and Fregia from LSCO were the highest-finishing junior college anglers.

The pair of Gator fishers finished seventh in the 2020 national championship held in Florida.